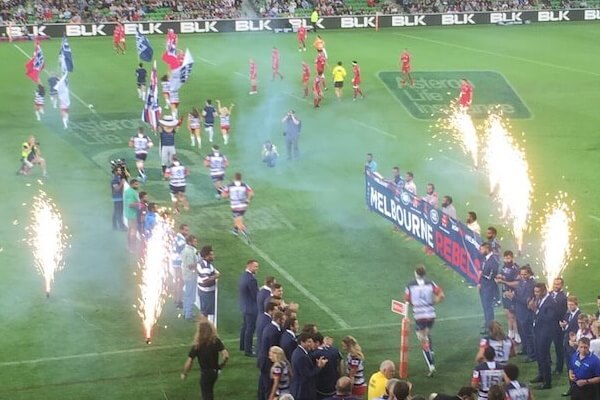 After a mixed tour of South Africa, the Melbourne Rebels return home to AAMI Park this Saturday afternoon to face an in-form pack of travelling Lions*.

Annus Horribilis, while providing 12 year-old boys with much snickering, can also be used to describe the Melbourne Rebels’ season thus far. An uncertain future, coupled with an injury list from hell and poor form have left the Rebels 2nd-last on the overall Super Rugby ladder and last in the Aussie conference (and considering the state of the Aussie conference, that’s BAD!). Recent success against Australian conference leaders, the Brumbies and a historic draw in Durban v the Sharks provided something to smile about, but then they played the Kings in Port Elizabeth…

On the other hand, the Johannesburg Lions have continued their winning ways after competing in their first Super Rugby final in 2016, going down to the Hurricanes from the windy city (no, not Chicago, the other one). This is the 2nd game for the Lions on their 3-match tour of Australia (also playing the Brumbies in Canberra in round 12). The previous round saw the Lions beat the Force 24-15, but the score was much closer at full-time until the Lions snuck in a bonus point try to seal the game.

Can Mitch Inman find the try line again against the Lions?

The Lions come into this clash with an 8-1 win / loss record. Having only lost the one match this season (away to the Jaguares 36-24 in round 3), and having won the last 6 on the trot, the boys from Johannesburg look to be unbeatable. This is a Lions side that is a far cry from the rabble they were back in 2012.

Meanwhile, over at the stockade, the Melbourne Rebels are sporting an unflattering 1.5-6 win / loss record, nothing to write home (or away) about. If the Rebels are leaving their winning run to the back-end of the season, best they start winning some games, and now! After improving 2015 and 2016 seasons, hopes were high for even more in 2017, but that has not been the case.

Tom English (Rebels): Having spent a good part of his career at wing for the Rebels, Tom English is relishing his role in the centres, pairing up with Mitch Inman and he is starting to look very much at home, having added quite a bit of beef over the past year or two.

Elton Jantjies (Lions): The No. 10 playmaker has come a long way. Instantly recognisable by his trademark hairstyle and pre-kick wiggle, the 3rd most famous Elton has become a very handy flyhalf for the Lions (and his country), being involved all around the park.

If you are a Victorian and you care about a Rugby presence in your state, then yes, you should bother and bother passionately (we are passionate in Victoria too). It’s Saturday arvo footy (why don’t they have more of it – oh yes, ratings), so bring your friends, bring your family and settle in for some crackin’ Rugby. There will also be a curtain-raiser in the form of a local grassroots (yes, we have that in Victoria too) Dewar Shield replay of the 2016 final between Harlequins and Melbourne Unicorns from midday. Great stuff!

The Rebels are so injury-ravaged it is much quicker and easier to just list those that are not injured (see list below). On their return from South Africa the Rebels have added to their hospital ward, captain Nic Stirzaker (ankle), Jack Debreczeni (hamstring) and Mick Snowden (foot). This has forced head coach Tony McGahan into making 6 changes to the run-on 15, including a new front row of Smith, Hanson and Weeks. Shute Shield Northern Suburbs lads Hugh Sinclair and Will Miller are in again as injury cover (run-on and bench respectively).

U20s scrummie Harrison Goddard is a chance to make his Super Rugby debut off the bench. Once again, Mrs. Fainga’a’s favourite son, Colby will captain the side in Stirzaker’s absence.

Lions head coach  Johan Ackermann, meanwhile, has made just three changes to his side that prevailed over the Western Force last weekend. Lourens Erasmus comes in at lock, Cyle Brink at 7 and Ross Cronje slots in at at scrumhalf.

OK, in the Rebels’ favour they are playing at home… and that’s about it, really. True, the Force did push the Lions for pretty much the full 80 minutes, so the win did not come easy for the South Africans, but the Force are a different team to last year and appear to be playing for their lives more than the Rebels are.

Touring South African sides can struggle as tours progress, but this isn’t the Lions from 2012, this is the Lions that made the final in 2016 and are making a good play to be at the top end of the ladder come season’s end.

The Rebels did show they can mix it with the big boys on their day, after a gritty win against the Brumbies in round 8 and a history-making draw against the Sharks in round 9, but subsequently falling to the Kings last round puts a big question mark over the Rebels ability to be consistent.

The Lions are way too good, too consistent and the Rebels too much the opposite, so there really is only one way this can go.  I predict the Lions to win by 18.

* Not to be confused with the British & Irish version.