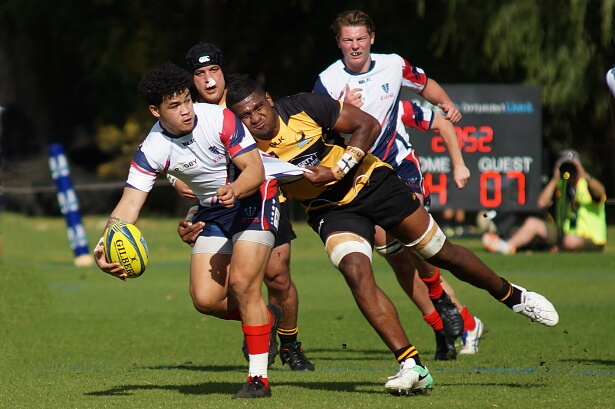 NRC2017 kicked off just where we remember 2016 finished. Plenty of points, some weak defensive structures, some gun youngsters and experienced stars. In all it was a fantastic weekend of rugby and one we would like to see continuing for the next couple of months.

Let’s look at some of the individual stand outs of the weekend.

Lead a pretty wonderful scrum battle for his Eagles against the Rams and backed it up with a running and off-loading game we rarely get to see in Super Rugby. Rams opposite number, Jed Gillespie had strong match with some general play errors letting him down.

Roach had a ding dong battle with Waratah squad mate, Tolu Latu, but came out both just like his team. Latu showed some great skill with and over the ball, but Roach’s ruggedness and seemingly superior fitness won him out in the end.

It’s not often a tight head prop scores a pair of tries so we need to recognise it when it happens. Faulker was part of a dominant first half Spirit performance and his tries were reward for his high workrate. He also lead a strong first half scrumming effort.

It can’t be long before Philip gets a Wallaby call up. The Force and Spirit lock again showed all the qualities we want from Wallaby forwards at the moment – most noticeably physicality in every aspect of his game and a massive work rate. We’re blessed with some pretty handy depth at the moment, and that’s evident in how hard it was to pick starting locks for this team. Tom Staniforth was impressive for the Eagles with strong work at the breakdown particularly noticeable.

Considering this was Tui’s first game since injury in early June, it was a mighty performance. Playing against a monstrous Fijian team, Tui repeatedly charged into the Drua defensive live bending it consistently and regularly able to off-load. He was rewarded with a try running a nice line onto a Quade Cooper pass. Reds team mate Izack Rodda was very strong for Queensland Country.

The former Brisbane City boy enjoyed his first outing with the Vikings and inflicted considerable damage on his fellow Queenslanders. Hyne gets through a hell of a lot of work but it was the impact of his running game that really caught the eye as he tore through Queensland County defenders. Although Angus Scott-Young, his opposite number, was very impressive throughout the match.

The Fijian Drua looked like they could inflict an upset early in their NRC debut against Brisbane City. While, as you’d expect, there was lots to like in the outside backs, it was the work rate of their openside flanker Mosese Voka that lead the way. One of only a handful of test players in the Drua, Voka was key in the lineout and ran strongly all game. Liam Wright’s enterprising play for Queensland Country was eye catching as well.

Naisarani was the find of the NRC last year with an exception season playing for an underwhelming Brisbane City. Move forward a year and he has started the 2017 NRC just has dynamically, albeit for a different team. A powerful running of the ball, Isi provided the go forward that unleashed his classy backline. Jed Holloway (Rams) and Sam Ward (Eagles) had a fantastic battle at TG Milner.

It was a high quality weekend for scrumhalf performances with Josh Holmes, Joe Powell and James Tuttle all in contention for selection. In the end we went with Ruru for his fantastic match control and play making. His option taking was excellent and created space and opportunity for his otuside men.

One of the benefits of the NRC is the opportunity for young players to experience rugby of a higher quality to club rugby in preparation for Super Rugby. This weekend we saw three young flyhalves put their hand up for further opportunities. Mack Mason was the best of the lot with a composed performance for the Rams that was equally impressive for his kicking (general play and for goal) as it was for his playmaking. His opposite Tayler Adams was a livewire while the Rising’s Jack McGregor is definitely one to watch.

For a moment this match looked like it could have been a record score by the Spirit over the visiting Melbourne team and all the play, and points went their way. The home team were generally in control most of the match but Koroibete caused them endless worry out wide. He scored two wonderful tries that would have caught the eye of Wallaby selectors, showing excellent positioning and lightning speed. Taqele Naiyaravoro was a handful as always but his option taking and distribution skills leave a lot to be desired.

In one of many fantastic positional match ups that delivered great moments this round, Tuipulotu v Billy Meakes was up there with the best. I’ve edged this vote to the Melbourne centre, with Duncan Paia’aua also a contender, because of the extra impact he provided in attack. Despite Meake’s strong defensive game, Sione was able to make plenty of metres and was caused plenty of headaches for the Perth midfield.

This wasn’t a position that necessarily had a lot of standouts this weekend and Kerevi wasn’t has brilliant has he has been in previous NRCs. He was pretty damn good though and, after a quiet beginning, found his way into the game and ran strongly throughout. Curtis Rona had his moments for the Spirit while Denis Pilgateau was one of the Rams’ best.

Fiddow made his NRC debut in style on cracking Spring arvo at Ballymore on the weekend snagging three classic winger’s tries. Each showcased his lightning speed and brilliant finishing abilities. The same abilities that stood out for his club side Wests all year and, unfortunately for us Aussies, the same abilities that have seem him capped for Samoa in 7s. Regardless of eligibility, he could be the new Fresh Prince of Ballymore if Junior Laloifi can’t get into the side soon.

Banks is another who had a brilliant NRC last year and who started their 2017 campaign in similar form. The obvious change is that last year Banks was doing it for Queensland Country and this year he did it against them, for his new team – the Vikings. You’d think Country would have been aware of his danger from last season. Seemingly not as he tore them apart throughout the match. Jack Maddocks (Rising) and Alex Newsome (Eagles) both looked very good at fullback for their respective teams.

Perth Spirit hold on over Melbourne Rising
The Tuesday Top 5