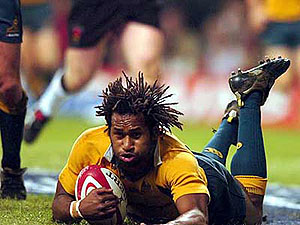 Well I guess we can’t say we didn’t see it coming; the night club fight in South Africa, the phone call prank with Michael O’Connor and now being too drunk to get out of bed and train for a piffling Tri-Nations game. Unfortunately for Australian rugby, the Tuqiri top has been spinning out of control for about a year now, and there are going to be more tears before bedtime.

Looking at the big league signings, there seems to be a common thread. The Rogers experiment ended with bitterness all round and Sailor was nothing short of a catastrophe, managing to sink the Waratah’s S14 hopes last year along with his Rugby career.

However, the difference with Lote was that on the field he has managed to adapt to Union and become a potent attacking weapon at both state and national level. And yet there seems to be an ominous storm brewing for Tuqiri. Just as his ego, boosted by his $6m pay deal, hits an all time high — as evidenced by the O’Connor prank and his latest sleep-in — onto the scene comes a number of young, fast and talented outside backs. Take your pick from Ioane, Mitchell, Turner and Shepherd, while keeping in mind the experienced Staniforth and Gerrard.

Reading between the lines there seems to be a few other indicators of organisational concern about Tuqiri; the two weeks of speed training and the fact that as of a few weeks ago, Vodafone still hadn’t signed his contract. Why is it that League signings to Union seem to attract this sort of attention? Do they just have less self-discipline or is it that the media spotlights them? Either way, with this latest furore, the negative impact of the Tuqiri firestorm now seems to outweigh his benefits.