Monday’s Rugby News reviews the semi final of Super Rugby AU, looks at the Wallabies squad and the host of the Rugby Championship along with recapping results at clubland The Reds have booked their place in the Super Rugby Australia Grand Final after defeating the Melbourne Rebels 25-13 at Suncorp Stadium.

The Rebels would dominate possession and territory during the first half, however, they would go into the half locked at 10-all thanks to an intercept try to Jordan Petaia.

From here, tries to Filipo Daugunu and Taniela Tupou would give the home side some much-needed breathing space, securing their place in the inaugural Super Rugby Australia final against the Brumbies.

“We’ve given ourselves a chance, which is all we wanted from tonight,” captain Liam Wright said.

“Keep fighting and give ourselves a chance to reach for it next week.

Wright praised the effort of the entire squad during the physical encounter, believing that their bench was the main difference makers.

“It takes a whole squad effort, those finishers really stepped up and did their job, as we knew they would,” Wright added.

“We knew it would go deep in the game and our guys would come on and do a job for us.”

With Wallabies coach Dave Rennie looking on, his pencilled-in Wallabies squad took a major hit as the main talking point from the match would be the influx of injuries to Wallaby hopefuls.

Wallabies hooker Jordan Uelese appears to be in the biggest doubt for the Tests after suffering an apparent AC joint injury whilst Petaia failed a HIA during the first half.

The 20-year-old was shortly joined by bolter Chris Feauai-Sautia, who continued his nightmare run with injuries as he left clutching his groin.

Meanwhile, flyhalf Matt Toomua was forced off the field after appearing to aggravate a groin injury, with his fullback Dane Haylett Petty continuing to struggle with a knee injury. 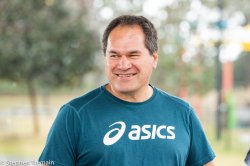 Wallabies Coach Dave Rennie will be making his home in Queensland

Wallabies coach Dave Rennie has named his first squad as new coach ahead of the 2020 Test season.

The squad contains 16 uncapped players as the Wallabies’ new era begins whilst a further 13 players have played less than 10 Tests.

Naturally, the squad is dominated by the two Super Rugby finalists, with 13 Brumbies and 11 Reds included in the 44 man squad.

“This is a really exciting day for us,” Rennie said in a statement.

“We’ve picked this squad on form and on potential and I know the whole group are chomping at the bit to get stuck in and push their case for a Wallaby jersey.

“There’s a big game to come on Saturday night down in Canberra but personally, I’m really looking forward to getting out on the grass in a week’s time to start putting in the work together.

“When we picked the squad, we had to consider how we will handle the rigours of the Test calendar ahead.

“It is obviously a big squad which is due to COVID restrictions as we can’t bring players in and out but each of one them is there on merit.”

Back-rowers Isi Naisarani and Jack Dempsey, as well as centre Tevita Kuridrani are the major omissions.

It is expected that two international-based players will be added to the squad, with SANZAAR allowing teams to take up to 46 players in a squad as a result of the threat of COVID. 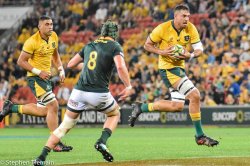 Rory Arnold gets into full stride

In a major boost for fans and Rugby Australia, SANZAAR has confirmed that Australia will host the upcoming Rugby Championship.

The tournament will involve a six-week, 12-match, “home and away” series involving Argentina, Australia, New Zealand and South Africa.

It will be primarily based in NSW, with Queensland set to host a doubleheader, including one of the Bledisloe Cup matches

“We are delighted that SANZAAR can, at last, confirm the participants and host country for The Rugby Championship and put an end to the continued speculation about the tournaments’ format and location,” SANZAAR CEO Andy Marinos said.

“Traditionally TRC is played as an international, cross-border series of home and away matches between Argentina, Australia, New Zealand and South Africa but due to the pandemic this is obviously not possible this year.”

“We have, therefore, worked very hard as a group to ensure TRC takes place this year, albeit in one country, and SANZAAR was meticulous in assessing the two options for hosting presented to it by New Zealand Rugby and Rugby Australia”.

RA CEO Rob Clarke was ecstatic after hearing the news, believing that it allows the sport to regain some all-important market control in Australia’s inflated sporting environment during a relatively quiet period.

“I think it’s an enormous opportunity,” he told reporters.

“Off the back of a heavily disrupted calendar this year to be able to play Test match rugby with four of the top global Test unions in a competition format such as it will be over a six-week period, in a time of year that’s not really traditional to play rugby, at a time of year in a nice way there’s not a lot of other content that’s going to compete with us, I think it’s a fantastic opportunity.

“I think it’s wonderful for fans, you’re going to be able to potentially go to one ground and experience two Test matches out of four of the best nations in the world and that will be happening week in, week out in NSW, so what a great opportunity for the game and fans.” This week’s club action through up a bunch of thrilling games and shock results as we near closer to finals time.

Starting in Sydney with the Shute Shield and it was Hunter that pulled off their first win ever as they defeated Western Sydney 28-15 whilst Easts upset Sydney Uni 22-14.

In other results, Norths smashed Randwick 46-17, Eastwood cruised to a 45-27 victory over Manly, West Harbour held off Penrith 38-29 and Gordon pumped Southern Districts 56-21.

Heading up to Queensland and it was Uni of Queensland that regained top spot on the table after holding off a valiant Brothers side 36-31.

Meanwhile, in a week for the away teams, GPS cruised home against Norths 47-20, Easts dominated Souths 57-26 and Bondi Uni defeated Wests 39-19.

In the nation’s capital for the John I Dent Cup, Gungahlin held off Uni-Norths 33-21, Royals drew with Queanbeyan 27-all thanks to a very late converted try to Royals whilst Tuggeranong pumped Wests 71- 29.

Heading west to South Australia and it was Adelaide Uni who managed to finally break their duck as they defeated Barossa 27-15 whilst Brighton held off a valiant Southern Suburbs 14-0.

Around the grounds, it was Old Collegians that dominated Onkaparinga 31-5, Port Adelaide cruised home against Elizabeth 43-11 whilst Burnside maintained touch with the leaders with a 49-5 win over Woodville.

Finally in WA for the Fortescue Premier Grade, Nedlands ended Cottesloe’s unbeaten start as they scraped home to a 20-17 win whilst ARKs and Wanneroo played out an entertaining 50-all draw.