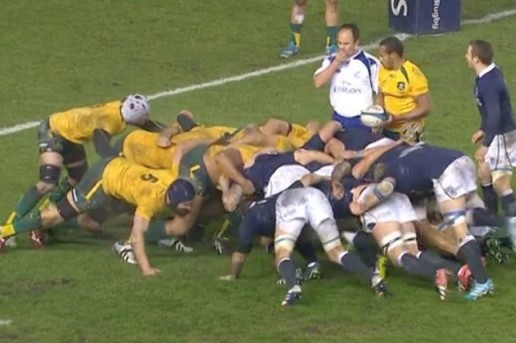 Monday’s rugby news has Link’s reaction to the Wallabies’ win, Gatland confident of a Welsh victory, Kurtley seen on the drink and the All Blacks making history.

Ewen Mckenzie’s Wallabies have overcome the sacking of six influential squad members to defeat Scotland 21-15, a feat which Link has lauded as a demonstration of the team’s mental toughness. ‘We went through a list of things that told us how hard it was going to be, so to be able to overcome and maintain this little run of wins was the most important thing,’ he said, especially impressed with the team keeping their opposition without a try for the second successive match.

The Wallabies will be searching for their fourth consecutive win against Wales, where the team will regain the services of their suspended stars. ‘I’m not going to keep punishing people,’ McKenzie said. ‘We took a stand and that was it, we move on. Only Paddy Ryan is not in contention, having played against Scotland to fulfil IRB prop regulations.

Welsh coach Warren Gatland has painted his side as favourites heading into next weekend’s match with Australia. ‘We have to be confident and look forward to it,’ Gatland said. ‘If we win next week and finish with three victories from four games it will be a satisfactory autumn.’

The Welsh side are riddled with an extensive injury list though, which includes centres Jonathan Davies (pectoral muscle), Jamie Roberts (ankle), winger Alex Cuthbert (ankle), prop rock Adam Jones (calf) and lock Bradley Davies (shoulder).  Wales will also be without Perpignan stars, lock Luke Charteris and utility back James Hook, and Bath’s versatile prop Paul James after their domestic clubs refused to release them for the match, which falls outside the IRB’s autumn Test window.

Kurtley Beale was reportedly spotted drunk at Bondi’s The Bucket List last Saturday night. Beale’s issues with alcohol have recently crippled his playing career, but an anonymous source has stated, ‘At one stage he was standing on chairs yahooing at the top of his lungs,’ adding, ‘I don’t know where that leaves ‘my troubles are behind me rhetoric’ and I’m not sure where his shoulder recon is at but he would have woken up with one sore head.’

The former Wallabies playmaker notably checked himself into a clinic in May to deal with his alcohol issues, having previously broken a written no-alcohol undertaking he had given to the ARU and the Rebels in a South African night-out which involved punching two Melbourne teammates.

All Blacks squeak past Irish

New Zealand have come from 22-7 down at halftime to beat Ireland 24-22 with a last minute try on Sunday, becoming the first team in the professional era to win all their Tests in a calendar year. The turning point in the match came when Irish fly-half Johnny Sexton missed a kickable penalty four minutes from time, lifting New Zealand’s spirits in the dying minutes. ‘It was special and is a great achievement,’ said coach Steve Hansen. ‘It has been a great year.’

In other New Zealand rugby news, the Chiefs are attempting to strengthen their backline by signing former All Blacks Mils Muliaina and Robbie Fruean. Muliaina is returning from Japanese rugby while Fruean is set to resume his Super Rugby career after undergoing heart-valve surgery.