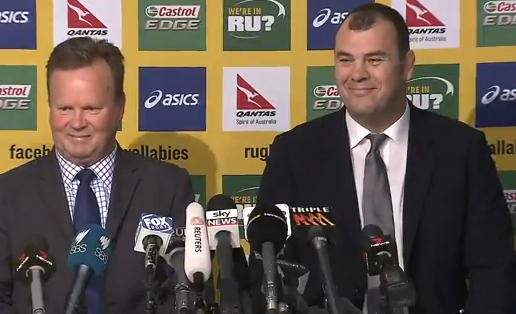 Monday’s Rugby News features a confident Michael Cheika, a ready-made replacement for Sean McMahon, Alistair Coetzee’s take on the action and midweek madness for the Wallabies during the spring tour. 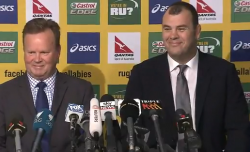 Michael Cheika isn’t too disheartened by the team’s 18 – 10 loss to South Africa on the weekend. The Wallabies’ chief finger pointer believes that the team played well, but just didn’t take their chances according to the SMH.

“I felt we were right in the game the whole time if not in control of the game,” Cheika said. “We played a little bit better than we did in Brisbane but we didn’t capitalise on the moments we had. There were a few good performances but we lacked the consistent quality. We showed good patches of quality and then we weren’t consistent with that.

“We had many visits down there, to their territory, and we didn’t pick any points up from many of them.” added Cheika. “That just about sums it up really. If we take our points down there, we win the game. We worked quite well to get into situations down there … we didn’t get enough shape to score another two or three tries, which we really should have done.”

Cheika was also ho-hum about Israel Folau’s yellow: “What’s the point, there’s no point saying anything about it, is there? [Folau] turned his back. What do you do? There’s nothing I can say about it that’s going to change anything anyway. It doesn’t help when you play with one less for 10 minutes, that does take its toll eventually.”

In addition, the Wallabies coach also shrugged off any questions about Reece Hodge’s penalty kicking, stating simply “that’s the game”. The nine points from Hodge’s three attempts could have won the game for Australia.

With Sean McMahon facing up to four weeks out after having hurt ligaments in his ankle on Saturday, Jim Tucker of the Courier Mail is reporting that the ARU minions have scurried off to the closest telegraph station to send an urgent SOS to Bath asking for the emergency loan of no. 8 Leroy Houston.

In McMahon’s place, Lopeti Timani is being groomed to take over McMahon’s starting spot.

Defence coach Nathan Grey said “[McMahon] had scans, he’s no good and will be heading home. Lopeti has been training at No.8 while we’ve been away and Leroy obviously trained with the squad during the June series. Leroy knows how we play so it’s a good option to have up our sleeve as well.”

Houston is currently playing for Bath, on loan from the Queensland Reds, and has already played three games for them recently. With the Wallabies next match being against Argentina in London, Houston is conveniently located to temporarily join the Australian camp.

According to the same article, Cheika has ruled out calling up an Australian-based player to replace McMahon, which means 49-caps Ben McCalman is left to twiddle his thumbs playing for the Perth Spirit.

McMahon’s injury leaves the Wallabies backrow in a bit of a pickle, after David Pocock broke his hand and Liam Gill chose France over the Reds (idiot!). 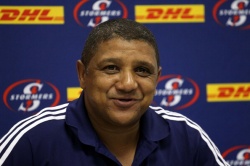 Underfire Springboks coach Alistair Coetzee is chuffed after the events of the weekend, which gave his side its first win in four games.

According to Planet Rugby he said: “It was an important win, not only for our confidence, but also self-belief. I am a very happy man and will never underestimate any test win. For a team that had their backs to the wall, a win like this means a lot and is a definite confidence booster.”

In particular, Coetzee was rather pleased with the team’s defence (“our defence was outstanding and our set-piece delivered the needed pressure on them when we needed it, which resulted in points for us at crucial times”) and attack (“We have been good with ball in hand, although our continuity is not what it should be”). He was also quite happy about the performances of captain Adriaan Strauss (also GAGR’s Man of the Match) and re-introduced flyhalf Morne Steyn.

On the flipside, Coetzee wasn’t too happy about South Africa’s territory game. “We wanted to play territory and get more set-piece in their half, but our chase line was not the best,” the Boks coach said.

South Africa’s next game is in Durban against the All Blacks, who after beating Argentina on the weekend, sit on top of the Rugby Championship ladder with 5 wins, 5 bonus points and a +135 point difference.

Georgina Robinson is reporting that the Wallabies have lined up a match against the French Barbarians in Bordeaux during the upcoming spring tour.

Currently, the Wallabies calendar for the spring tour will feature visits to perennial easybeats Wales, Scotland, France, Ireland and England, and it’s on the Thursday night in between the Paris and Dublin fixtures that his Barbarians match will take place.

Robinson writes that this match is a “big boost for Michael Cheika’s plans to use the spring tour as a development exercise”, explaining thusly:

“The French Barbarians game has been secured late in the piece but could serve two purposes. Cheika will use it to give valuable game time to players on the fringe of a squad of 30-plus players, but could also draft in a few Australians playing in Europe. As the game will not be a Test match, Cheika will not be bound by the ARU’s eligibility rules and could use the game to keep a few players of interest in touch with the Australian system.”