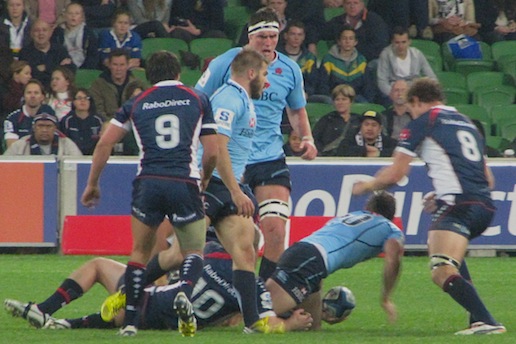 The Melbourne Rebels have defeated the NSW Waratahs for the first time in history, lifting the Weary Dunlop Shield.

After finally converting a month-long stint of close performances into a win against the Stormers last week, the spirits of the Rebel faithful were buoyed in the hope that finally, their team had clicked. One win alone, however significant, could not completely silence the doubt within a team that has had more than a few standout games, but had only managed to win two consecutive games twice before.

The key for the Rebels was consistency. Last week had proven that they could compete against the big teams in this league, this week, they needed to prove that they could do it again.

The Waratahs, meanwhile, were on a roll, going for their fifth straight win and that elusive finals spot. With very little room to move between now and July, they would not make the same mistake the Stormers did, and disrespect the young Rebels.

The teams traded penalties as the match opened, Jason Woodward opening the scoring with a 47-metre bullet in the 5th minute, before Berrick Barnes converted from a penalty at the resulting kick-off to level the match 3-3 after 8 minutes.

The Rebels regained the ball from a Palu turnover at the kick-off, Hugh Pyle making the break and hitting the ball up deep in the Rebels’ attacking half. The Rebels sent the ball wide and found Tom English uncovered by Drew Mitchell on the wing, who dived across the line for his maiden Super try. Woodward had no trouble with the conversion, the Rebels lead 10-3 after a pulsating 10 minutes.

Mitchell was desperate to atone for his mistake, regaining the ball at the restart and making a huge line-break that sent the visitors deep into attack. The Rebels did a mammoth job of holding the attack at bay, but conceded a penalty for offside just as they looked to have turned it over. Barnes opted for the kick and converted, reducing the margin to 10-6 after 12.

Jason Woodward was electric for the Rebels in the opening stanza, collecting the restart from Barnes, chipping over the defensive line and regathering, passing to Higginbotham who punched it into the attacking 22. The home side were using the ball through the forwards to great effect, and looked to be over for their second, but the Waratahs defensive line had done enough to hold them up, conceding the 5m scrum.

The Wallaby scrum dominated the Rebels, able to wheel the scrum and get the turnover. The Waratahs continued to run, but both teams struggled to get any major plays going, possession looking increasingly scrappy as the first half went on.

The teams went back to trading penalties, Woodward converting a penalty on the half-hour at the hands of Palu, who was lucky not to get sent off for repeated shenanigans at the breakdown. Two minutes later, the Waratahs returned the favour, Barnes converting a penalty for not rolling away and returning the margin to 4, 13-9 after 32.

As the first half closed, Jason Woodward tried a drop goal from 50m to give the Rebels some breathing room, clearing the distance easily but sending it just wide. The Waratahs ran the ball and were making easy metres, with only desperate Rebel defence stopping them from making the final metre necessary to score the try. Mitch Inman looked the hero for the Rebels, turning over the ruck and regaining the ball, only to pass it to Lachlan Mitchell, whose pop pass was intercepted with insulting ease by Israel Folau to score the Waratahs’ first try. Converted, the visitors claimed the lead going into half time, 16-13.

The game tightened up in the second half, but the Waratahs seemed lifted by the lead – and a Chieka grilling at the half. They started well and were rewarded 5 minutes in, with the Rebels conceding a penalty at the scrum and Barnes opting for the kick, his success extending their lead to 6, 19-13 after 45.

Their momentum would not last, though, as the Rebels began to rise and really give it to the visitors. They were throwing themselves at the contest, and the unease in the Waratahs camp was palpable, with dropped balls and poor passing starting to seep back in to the Waratahs’ game.

The Rebels hit back with a Jason Woodward penalty on the hour, courtesy of Hooper straying offside, reducing the margin to three. They continued to fight on, keeping the ball in tight and timing their wide runs with precision. Hooper would give away another penalty for offside on the Rebels’ attacking 22, which Jason Woodward slotted with ease, levelling the scores with 15 minutes to go.

The Waratahs looked to Folau to kick-start a resurgence, but he couldn’t get his hands to a cross-field kick in his direction and turned it over. The Rebels regained the ball but conceded a penalty through Higginbotham, giving Brendan McKibbin a relatively easy kick to regain the lead, 22-19 with 10 minutes left.

The Waratahs were desperate to hold on to the ball, working a ridiculous amount of phases to eke closer to their line. After what seemed like an eternity, the Rebels got the turnover and cleared to their own 30m.

To the roar of the crowd, the Rebels regained the ball at the lineout and ran like men possessed. Woodward found the gap and broke to the 22, passing to Stirzaker who made a few metres before being tackled. The ball went wide to Cadeyrn Neville, who offloaded in the tackle to Lachlan Mitchell, who found Tom English in the corner for a brace. The crowd went wild, even as Woodward missed the conversion. The Rebels led 24-22 with minutes to go.

As the match closed, the Rebels’ ill discipline looked to have cost them the match, as they lost possession and then gave away a penalty for collapsing. McKibbin lined up the penalty to win the match, and skied it.

And with it, perhaps, the Waratahs’ play-off hopes.

Tom English‘s double capped a fine performance from the young back, and captured why the stocks of this young breed of Rebels is rising every week.

Jason Woodward. Kurtley who? James O’who? The Rebels’ full-back was immense all night, clocking 14 points and several great runs. He continued the blistering form he has shown since his debut, stamping himself as one of the finds of the season.

The Waratahs forwards were great in the scrums, but ordinary in open play. Players like Timani, Kepu and Palu needed to have a much bigger impact on proceedings than they did.

Preview – Aussie matches in Round 15
Review: Brumbies See Off The Blues