Match Review: Highlanders v Rebels AKA So Near, Yet So Far 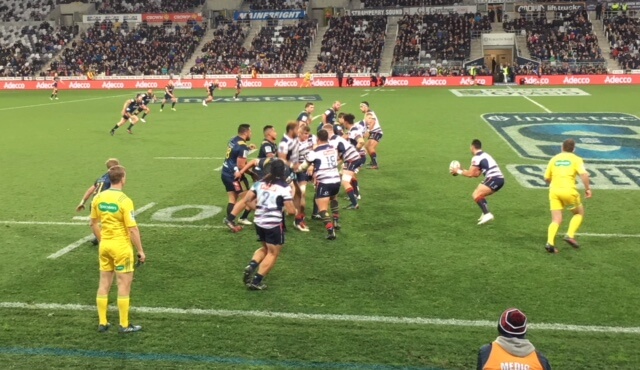 Match Review: Highlanders v Rebels AKA So Near, Yet So Far

The Rebels have the playoffs in their sights for the first time in their short history. Can they cement a spot in the top 8 when they visit Dunedin for this final round clash?

The Melbourne Rebels have never been a finals chance this late into the regular Super Rugby season. They travel to Dunedin to meet the Highlanders after disappointing showing against the Reds and Waratahs in the previous two rounds. A win against the Highlanders would assure the Rebels a finals berth.

For the Highlanders, they are already into the playoffs, but a loss to the men from Melbourne could change who and where they play. The Rebels were still without Genia and Coleman due to injury, as well as losing Dane Haylett-Petty during the week. The All Blacks policy to rest players for two Super Rugby games a season saw Aaron Smith, Ben Smith and Luke Whitelock sitting out the game.

The Rebels got off to a good start from the kickoff and put first points on the board via a penalty to Reece Hodge. The Highlands struck back fairly quickly with three points of their own via the boot of Lima Sopoaga. The first of ten tries in a high-scoring game went to the Rebels via a rolling maul off a penalty lineout. Amanaki Mafi was the recipient of the first five-pointer.

Reece Hodge scored the first of his three tries in the corner off some quick, clever passing and added the conversion from the sideline. Nine minutes later Hodge grabbed another meat pie off a charge-down with the added conversion taking the Rebels to a 17-3 lead. Momentum changed three minutes later when Michael Ruru was yellow-carded for a dangerous trip-tackle on the Highlanders’ Lima Sopoaga.

During Ruru’s 10-minute rest in the naughty chair the Highlanders took full advantage, scoring two converted tries to level the scores 17-17. A charge-down try to Reece Hodge and an unconverted try to the Highlanders’ Walden had the sides heading into the change rooms 24-22 in favour of the boys from Melbourne.

“Who, me?” A yellow card to  Michael Ruru had a big impact on the game.

The second half started with pretty much the same intensity of the first, with no change in the score until the 52nd minute when Hodge became the recipient of yet another change-down try (when will the Highlanders learn, Reece is not a small man). A penalty to Hodge in the 59th minute gave the Rebels a comfortable 34-22 lead, but it was not comfortable enough against a Kiwi side like the Highlanders.

From the 63rd to the 77th minute, the Highlanders scored 21 unanswered points, putting them out to a 43-34 lead. The Rebels were not out of it, though and a penalty kick to Jack Debreczeni put the Melbourne lads within 6 points. A final penalty to the Rebels on full time gave them a lineout throw and a long run by Sefa Naivalu, saw Jack Maddocks in reach of the Highlanders try line. However, Naholo was having none of that and produced a try-saving, match-winning tackle that gave the Highlanders the turnover and the game.

Reece Hodge bags 3 tries in a record 29-point haul for the Rebels.

“We were our own worst enemy” – Dave Wessels, Rebels head coach.

The men from Melbourne were in command for much of the game, but lapses in discipline and concentration at crucial times handed control and the match to the Highlanders. The bonus point loss put the Brumbies out of finals contention and at the time of writing this review, the Rebels are still in the finals race, with their fate in the hands of the result of the Sharks v Jaguares game. If the Sharks win, the Rebels are out. It is out of their control and that is probably the toughest lesson the Rebels have learnt this season.

Kayne Hammington scores a try for the Highlanders.

Two moments stand out: Firstly Michael Ruru being yellow-carded in the 23rd minute for a dangerous trip tackle on Lima Sopoaga.  Two tries were scored during this 10-minute period. Then, with the Rebels in a commanding lead,  Li’s try in the 63rd minute changed the course of the game. As so often has been the case for the Rebels this season, they have held strong for much of the game, only to run out of puff in the final quarter. They worked hard to come back, but too little, too late.

Reece Hodge – “Give that boy a coconut, grandma!” I don’t know what that means, but scoring 29 of the Rebels’ 37 points, Hodge had a cracker of a game and broke a Rebels point-scoring record.  It makes the loss all the more disappointing, given the input he made.

Other than Hodge, there were no particular standouts for the Rebels. The current crop of Wallabies equipped themselves well, if not setting the bar any higher.