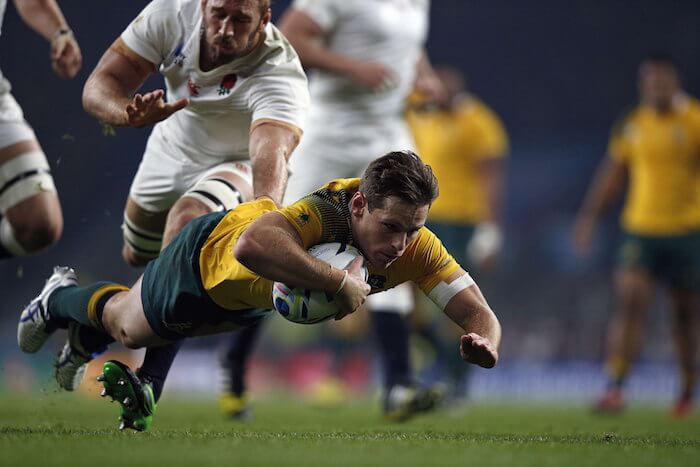 I don’t want to overstate things here, but does anyone else feel this is a little like a Lions tour?  I’m guessing we’re not going to be inundated with white walkers from the north throwing their pounds around like we get when the Lions come to town every 12 years. And perhaps I’m just trying to find some sort of replacement for that mentally scarring official Lions tour of 2013 (just nine more years until retribution). However as Dennis Denuto once said – it’s the vibe.

So this is the first time ever that the Wallabies have taken on the Poms in a three-match test series and that alone contributes to the Lions-feel. The fact that we are taking on an English team that have shown all signs of being highly competitive as distinct from some of the ‘tourists’ sent down for previous mid-year test series, has created almost unprecedented interest in the series.

Of course what has helped with the hype has been the relationship between opposing coaches, Michael Cheika and Eddie Jones. I’m not sure if there’s anything I can add here that hasn’t been already covered elsewhere. Suffice to say the traditional media have used it as a promotional anchor for the series however it’s now time for the action on the field to take the limelight.

Australia’s amazing performances at RWC2015 proved to many doubters (me being one of them) the true credentials of coach Cheika. His ability to draw his squad together and focus them on a united front, after a period of such turbulence, was one of the more impressive coaching performances in Australian sport of late.

There seems little doubt that Wallabies will enter this upcoming and historic test series confident of securing a series win. Whilst the Super Rugby season has been, to put it generously, hit and miss, the majesty of Cheika seems enough to secure a positive outlook among the Australian rugby fans.

After a number of mid-season camp outs and coffees involving an extended squad of seemingly 80% of Super Rugby players, a squad of 39 players (really 42 or so) got together on the Sunshine Coast for their first proper hit out since Twickenam last year. That squad was trimmed to 30 (really 33 or so) with speculation mounting as to who wasn’t training, who would play in some of the more debatable positions and who was having babies (not Mrs Lealiifano it would seem).

Originally it was thought that Cheika would stay pretty loyal to his World Cup incumbents, but there are in fact numerous changes from that Grand Final 23 man squad. Congratulations to test debutants Dane Haylett-Petty, Samu Kerevi and Rory Arnold, who will start at wing, centre and lock respectively. Reds scrumhalf Nick Frisby could also snag a first test cap if he features from the bench. All three starting rookies have been rewarded for excellent Super Rugby form and the challenge will be, for DHP and Kerevi specifically, whether they can reproduce their excellent attacking work at the next level. Both a stats leaders for their respective teams but will be tested by the high pressure environment that is, ahhh, a test match.

There’s no getting around the fact that England’s performance at the RWC last year was sub-standard. In fact the best performing team at the World Cup were the tournament organisers who put on a terrific event. The only thing they couldn’t control, however, was England missing out on the finals, and performing so insipidly.

The RFU reacted and the appointment of Eddie Jones was a pretty strong statement of intent, and when the aggressive little hooker picked another, in Dylan Hartley, as his captain the message was clear.  Greater intent and purpose, both on and off the field, would be the way forward, with the famous Jones brain strategising around the clock.

Results were pretty damn instantaneous as England won this year’s 6 Nations and secured their first Grand Slam in 13 years.  Together with the development of a bloody strong Under 20s program (winners in 2013 and 2014, Runners up in 2008, 2009, 2011 and 2015) and Eddie has a lot of talent at his disposal. He’s stayed loyal to his starting pack that secured the 6 Nations against France, whilst created a new halves combination between Owen Farrell and Ben Youngs, whilst also opting for Marland Yard on the wing.

Anyone who listened to our podcast with the EggChaser guys, know that the Poms are pretty content with the status of their lock stocks at the moment. Whilst Aussie fans were busy working out who to pick for their starting spots, the Pommy fans were seemingly trying to rack their head around who to leave out! As it turns out the Saracens pair of George Kruis and Maro Itoje both start with Man of the Match Joe Launchbury joined by the extremely talented Courtney Lawes on the bench. The remarkable Itoje has been picked and is one to watch for us Aussies, coming with plenty of hype, so watch out for his work at the breakdown as well as his dynamic play in the loose.

For the Aussies, they have stuck with their RWC incumbent in Rob Simmons and the 2.08m Rory Arnold makes his test debut alongside him. Simmons still can’t quite convince the mass public of his credentials as a test lock despite him coming off arguably his best season in Wallaby colours. The towering Arnold, by no means the physical athlete that Itoje is, adds some considerable size to the Wallaby pack and hopefully the physicality that Kane Douglas did for us last year. Lineouts will always be the tangible manifestation of this battle, but it will both their work-rate around the field and their impact at the tackle and breakdown that will be also be significant on the outcome.

One of the lines in the sand drawn on recent podcasts of both the EggChasers’ and our own, is around the flyhalf position. Using the age old testing stick of ‘who from the English team would make the Wallaby team”, our friends from the north had little hesitation in proclaiming that Owen Farrell would get the 10 jersey. Whilst their podcast is obviously pre-recorded in the UK, you could almost hear the spit take of both Matt Rowley and Hugh Cavill as their respective coffees sprayed their respective keyboards.   And they would not be alone in such a reaction. One only has to go back to these countries’ last encounter at the World Cup for the argument for Bernard Foley. I’ll go out on a limb and suggest it was the best kicking game from a Wallaby flyhalf since the days of Michael Lynagh, whilst also bagging a brace of tries in the process.

Now the EggChaser lads were suitably praiseworthy of Foley however were steadfast in their selection of the English 10. Whilst Farrell has just lead his club team Saracens to the Premiership title, he featured at inside centre in the English team’s 6 Nations campaign.  From there his goal kicking proved crucial to securing the trophy in wins over Wales and France, whilst he created tries as well. The EggChaser described him as the best flyhalf in Europe so he’s clearly shown more up there then most Aussie have seen of him and goal kicking will prove crucial in what should be a tight series. So will, though, will be getting the ball in those classy outside backs on both sides and which 10 delivers this most effectively should stand triumphant at the end of this test match.

How good is this? I haven’t been this excited about two hookers going at it with each other since Game of Thrones Season 1 Episode 7!  It’s what it’s all about isn’t it? Forget the glory stuff outwide, here we have just two complete hard cases going head to head in the middle of two of the most physical forward packs in recent times. To the surprise of many, given his workload last year and (let’s say it) his advancing age, Stephen Moore has been in wonderful form for the Brumbies this year. By all reports he has formed a strong working relationship with his Wallaby coach and his leadership significance stretches far beyond just the playing field.

English Eddie made Dylan Hartley his captain in one of his first roles as newly appointed coach. Whilst some scoffed at the appointment, given Hartley’s questionable discipline, it was a statement made as to Hartley’s commitment to the cause. His uncompromising nature has gotten him in trouble in the past, but Jones wants it harnessed to provide his team the old school workmanlike attitude often overlooked in modern day rugby teams.

Originally I had expected the Wallabies to sweep the series, but I have got an awful feeling that my sons and I will see a Wallaby defeat at the hands of the English in the stands of Suncorp this Saturday night. Much like the Japanese upset South Africa, Eddie has had this game circled in red ink in his schedule for some time. He knows this is the big one and that the English must come out of the gates fast if they want to win the series and he’s been planning for it for months. The Aussies, on the other hand, look a little disjointed. Whilst I’m glad to see some of the new talent on show, it just seems a bit too much of a risk in the conditions given the three rookies are not just new to the team, but weren’t even part of the RWC squad last year.  It’ll be a bloody good encounter, but I’m tipping England by 4.