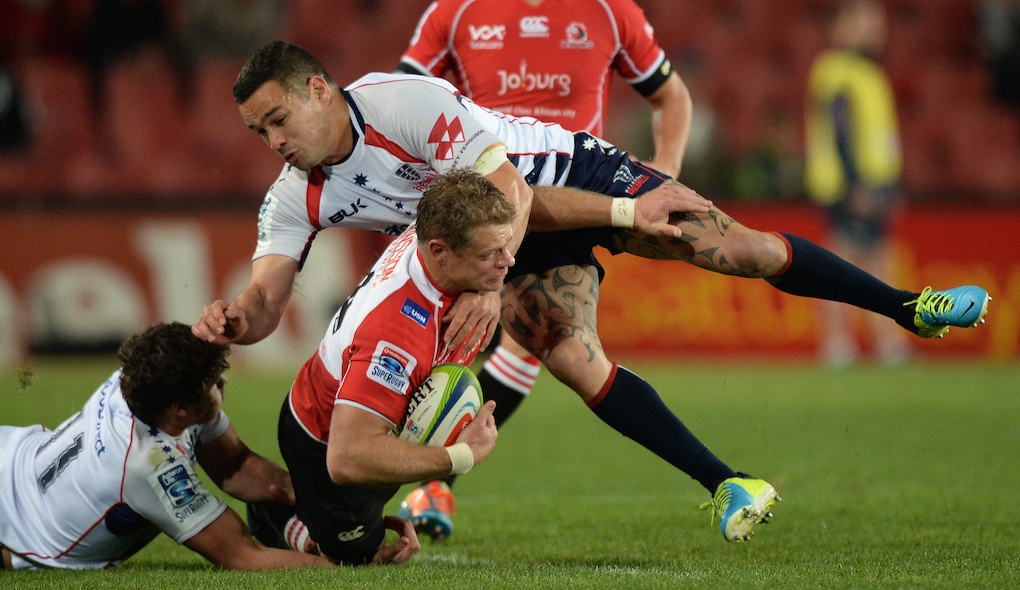 The Melbourne Rebels remain winless on foreign soil, letting a second-half lead slip to lose 34-17 against the Lions in Johannesburg.

Both teams went into the game chasing records. The Rebels were without a win overseas in their four years of Super Rugby, a black mark the franchise has struggled to erase from their history. The Lions, returning to Super Rugby this year after earning promotion against the Southern Kings, had the chance to turn in their best season ever with a sixth win.

The Rebels started poorly, conceding a try from a turnover in just the second minute, when Marnitz Boshoff released Anthony Volmink to score an easy try. Boshoff couldn’t convert and the Lions led 5-0 after 2.

The Rebels would concede another three points when Hugh Pyle was caught off his feet in a breakdown. This time Boshoff made no mistake, taking the lead to 8 after nine minutes.

Slowly but surely, Melbourne began to work themselves into the game, keeping possession and camping out in the Lions’ side of the half-way, even coming painstakingly close to scoring on one occasion.

The momentum had begun to shift, and the Rebels would be rewarded when Bryce Hegarty capitalised on a turnover deep inside the Rebels’ own half and sent Tom English away for a brilliant long-range try. Jack Debreczeni took the kick successfully, bringing the visitors back into the match, down 8-7 after 23.

The Rebels suddenly had the run of the ground, Tom English toying with the Lions’ line, but a clearly nervous Debreczeni struggled to make the hosts pay for their lapse in concentration, missing a sitter of a penalty on the half-hour that would have given the Rebels the lead.

Instead, the Lions converted a penalty of their own in the next set of plays, Boshoff’s kick from a Colby Fainga’a indiscretion extending the lead to four. That is where the margin would stay for the first half, Debreczeni and Boshoff trading one more penalty each in the final ten minutes for a 14-10 scoreline at oranges.

The Lions missed an early chance to go further ahead, when Marnitz Boshoff took a long-range penalty that fell short. The ensuing dropout led to a bit of kick-to-kick before the Rebels ran through seven phases to get the ball deep into the Lions’ half. After two false-starts, with good runs ending in a penalty and a charge-down, the Rebels played on from a penalty to send Colby Fainga’a over for their second try. Debreczeni converted and the Rebels led 17-14 after 53 minutes.

Tom English then set out to score a double, diving out of the remains of a ruck to spectacularly put the ball past the chalk. Unfortunately, the chalk he displaced was that of the five-metre line, an action that, whilst impressive in its own way, currently awards no points in accordance with the Laws of the Game.

From that point, the altitude of the high veldt and the inexperience of the Rebels began to chip away at the visitors, and the Lions took control of the match. Fainga’a’s efforts were cancelled out almost immediately by a long-range try to the Lions, Warwick Tecklenburg at the end of a nine-phase, 83-metre run by the hosts to score their second and regain the lead. Boshoff added the extras to give the Lions a 21-17 gap on the hour.

The hosts would convert two more penalties to extend their lead to ten, before the Rebels were made to pay – not for the first time this season – for the lack of discipline from their captain. With ten minutes to go, Scott Higginbotham was sin binned for a juvenile tip-tackle.

The Rebels would not go unpunished for fielding fourteen men, Warren Whiteley taking advantage to score the Lions’ third. Boshoff scored his nineteenth point for the game with a successful conversion, the Lions saluting with a 34-17 win.

Tom English’s five-metre “try” and the subsequent turnover, as innocuous a mistake as it may seem, sucked all of the air out of the Rebels’ momentum. The Lions scored a belter from the next play and ended all hope of a Melbourne win.

Marnitz Boshoff. A nineteen-point haul could not have come at a more valuable time, when the Rebels were struggling to convert their own chances. For the visitors, Tom English and Colby Fainga’a both had honest games.

Scott Higginbotham’s discipline makes another appearance in these reviews. It is an incredible shame that a player who emerged as such a strong leader within the Rebels in 2013, seems intent on reducing himself to no more than a thug. I would have serious reservations about taking Higginbotham on tour until he sorts himself out.