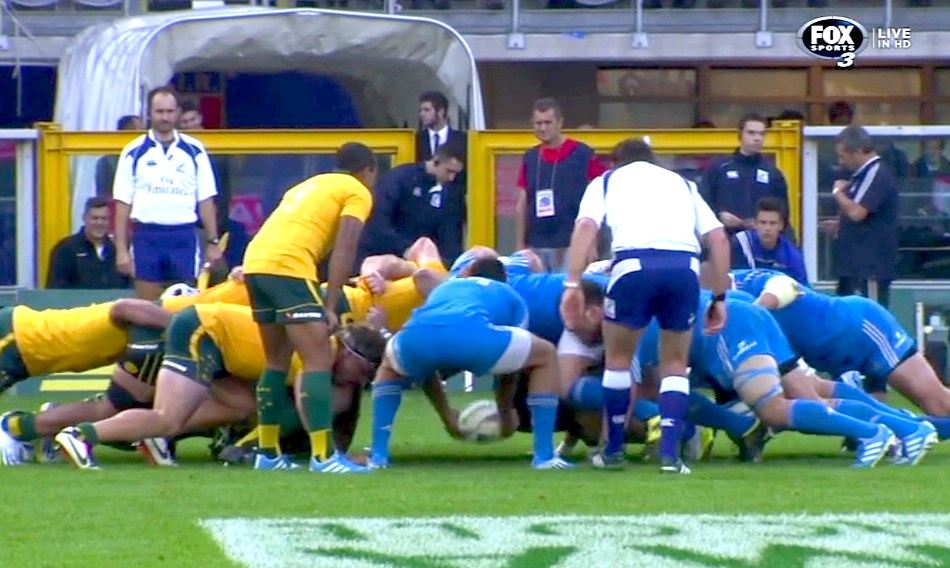 Once again Italy isn’t capable to wrap up a win despite a good effort against the Wallabies. The final score punishes the wild boars’ efforts and isn’t a reflection of the game.

Italy out-manned the Wallabies scrum in the crucial moments of the first half when Australia was pushing against their try line, but was let down mainly by the line-out when O’Shea’s men went for the try instead of settle for easy 3 pointers.

Two controversial decision by referee Pascal Gauzere saw Italy on the wrong side of the decision and left some bitterness in the home side’s post match beers.

Both teams were slow to get proceeding goings, apart a missed penalty by Toomua, the scoreboard remain fixed on 0-0 for 30 minutes.

The first half hour wasn’t boring despite this, with the crowd on their tows either for Italy’s attacking the Wallabies tryline or for them defending to the last man their own.

At the 13th minute scrumhalf Tebaldi intercepted the ball after a bad pass in the Wallabies lineout, but when he was running untouched towards the tryline, referee Gauzere blow his whistle interrupting the game.
If he wouldn’t have done so, the TMO may have allowed Italy’s try, as no evident infraction from the number 9.

Italian dominance was interrupted by a brilliant Wallaby try initiated by an in-form Samu Kerevi and concluded by last minute inclusion Marika Koroibete.

Italy felt the pinch and conceeded a second try to the Rebels’ winger after only 5 minutes.
Fortunately the second try awake the wild boars from their momentarly numbness and the home side finished the half on a high.

Captain Ghiraldini decided to go for the try with the clock winding down, but his men weren’t able to hold the ball in the maul following his throw from touch.

The second half started with another controversial decision. Taniela Tupou scored a brilliant try, but his action was eased by a Pocock block on Lovotti, which was ruled uninfluential to much of protesting by the home crowd.

Italy was quick to get back at the visitors and Bellini scored an intercept try thanks to a Foley no-look pass.

The following 30 minutes saw Italy camping in the Wallabies half desperately searching another try, but Australia’s gallant defence denied them in multiple occasions.

Even when a man up, the wild boars weren’t able to break the Wallabies defence and the game ended in a bitter way with Will Genia try to seal the game at the 79th minute.

Sio’s yellow card also raised some eyebrows as his deliberate knock on was very close to the tryline and may have been deamed a penalty try in other occasions.

After a forgettable loss against Ireland in Chicago and a decent win against 6 Nation pretender Georgia, Italy showed improvement. As in Brisbane in 2017 O’Shea’s men put the Wallabies to the sword but weren’t able to made the game their, leaving Australia along England and New Zealand the only teams they never beat.