After Grammar whisked away the GPS premiership from Nudgee’s grasp in the final round of last year, Nudgee showed why they are thought to have one of the best rugby programs in Australia.

They remained calm under immense pressure and kept in touch with Grammar on the scoreboard despite their favourable territory and possession before scoring two late tries in the second half. 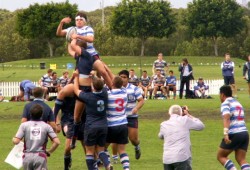 Grammar and Nudgee traded points early  through kickers Matt Marsden and James Tuttle but it was Grammar who were on the front foot, they repeatedly ran their way into the Nudgee half through centres Lakehm Aiono and Lachlan Lanskey, elusive fullback Marsden and hooker Michael Murray who made a bullocking run after stealing the ball.

But against the momentum of play Nudgee centre Campbell Magnay was put through a gap on the short side and ran 40 metres holding off the last defender to score in the corner putting Nudgee ahead 11 – 6 at halftime.

Like they had in the first half, Grammar came out the stronger in the second half and from a powerful maul formed off a lineout they pushed there way 20 metres onto the Nudgee tryline.

From here massive Grammar centre Lakehm Aiono was too big to stop and he barged over off a short ball to give the lead back to the home side.

Grammar ventured back into Nudgee’s 22 and were afforded a promising attacking opportunity when tall winger Zachary Laud bundled the fullback into touch five metres from his tryline.

No. 8 Trey Kemp then capitalised on this chance, diving over in the corner to put Grammar 7 points ahead mid-way through the second half.

Despite having a player sin binned off the ensuing kick-off for a malicious hit on the receiver, Nudgee kept Grammar in reach with another penalty.

Nudgee then moved into a good position in the Grammar half and sucked in defenders with some big forward runs through the midfield and exploited the resulting overlap, putting winger JC Smith over in the corner for a one point lead and many Grammar fans faces in hands.

Nudgee remained in control from there and after some sustained pressure on the Grammar line Australia A rep Matt Gibbon burrowed over to cement the win that almost certainly ends the defending champions hopes of reclaiming the GPS title.

Title-hopefuls Churchie were overrun late, conceding a try on full-time to a committed and tenacious State High in after a high-scoring, see-sawing match. Some wounds will be getting licked this week and some pundits’ forecasts being rewritten. Final score 35-31 to BSHS.

BBC journeyed up the mountain to Toowoomba Grammar’s first rain-soaked home round in six years, looking for a result after a mixed pre-season. The breakdown battle was especially fierce. Leading 18-0 at half-time after two tries late in the half, they were able to equal a resurgent Toowoomba Grammar 14 apiece in the second half to eventually run out victors. Final score 32-14 to BBC.

The highly-fancied TSS visited the building Gregory Terrace, and convincingly set the high-water mark for teams this season. Final score 33-12 to TSS.

A Note Regarding Videos

Regular readers will remember that last year, videos were posted thanks to DoubleTake Productions, featuring highlights of 1st XV fixtures.

Unfortunately we won’t be able to throw up the video pieces this year. A few coaches have asked that that match footage be kept offline ’til season’s end, until such time as all teams’ content is shared, and publically viewable, equally. May that day soon dawn brightly.