Friday’s Rugby News has the Wallabies and England squads, positive words from Michael Lynagh and Jonny Wilkinson, and three in a row already for the Golden Girls.

The Wallabies squad for the final test of the season has been announced, and boy is it an early Christmas present for the GAGR faithful.

Michael Cheika has recalled Lopeti Timani to the backrow, and pushed David Pocock over to blinside flanker. Yep that means what you think it means – Dean Mumm won’t be starting. He’s on the bench.

There can be absolutely no excuses for a Wallabies loss now.

In other news that will warm the cockles of the GAGR faithful’s cold heart, Sefa Naivalu is swapping places with Henry Speight.

Nick Phipps is also starting, given that Will Genia hasn’t been released. Nick Frisby thus comes onto the bench, and with Quade alongside him, the Reds halves pairing for 2017 could well play for the Wallabies before their club team. 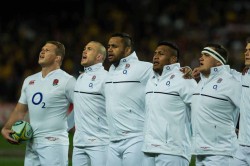 Eddie Jones has made two changes to the starting XV that saw off Argentina, and that’s only because one of them was injured and the other is suspended.

Nathan Hughes will be coming in at the back of the scrum in place of Billy Vunipola, who has injured his knee, and Marland Yarde is swapping places with Elliot Daly, who’s been suspended for three weeks after being red carded on the weekend.

Ben Te’o, the former leaguie, has been named on the bench.

England are currently on a 13-match unbeaten record, and if Israel Folau decides to not pass the ball again, that could possibly be 14 after Saturday’s game.

Michael Lynagh, unlike certain other former Wallabies, has come out fists up for the Wallabies, telling the BBC that the Wallabies are over their post-World Cup hangover.

“Australia are in a different place now,” Lynagh said. “There were a few guys [in the summer] who hadn’t played Test rugby before. They are going to be more competitive than they were in Australia. It’s a different team altogether.”

Lynagh, who knows a thing or two about carving it up at flyhalf, singles out Bernard Foley as the man to watch. “He was out of form in Super Rugby and when England toured.”

“He is a different player now. We saw against Wales how good he was then and how sparkling he was. He also has a lot of new people around him – he has got used to them and they have got used to him. It is a different Foley to what we have seen for most of the year.”

Jonny Wilkinson, who used to play for England or something, is cautious about the Wallabies.

“I have confidence in these [England] guys, but I’ll be wary of an incredible [Australia] team coming this weekend,” Wilkinson said.

“They are a team that is clearly on the move upwards, and some of the things they were doing against Ireland were as sharp and as quick as you will see in the international game right now.

“If anyone is a bit out of position it will be a long match for England, but they will be prepared and ready. It’s the challenge we need.” 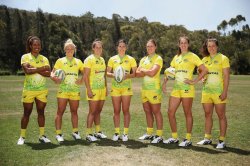 The Australian Womens Sevens team was back in action last night, and boy did they win win win.

No, really. Three games, three wins. Sitting astride Pool A after the first day’s action, Tim Walsh’s charges saw off South Africa 38-5, Russia 20-7 and then America 19-10.

Emma Tonegato was the standout on day one, scoring a hatrick against the Saffers. Tim Walsh talked to World Rugby:

“They went pretty well, a tough start but got the results so look forward to tomorrow,” GAGR’s friend said. “We love it and it’s an awesome place to come, to defend our title it would be a great start to the season and an incredible way to end the year. It was pretty special winning in Rio, a memory that will last, but it’s the past and we now need to look forward.”

The action in Dubai resumes later today, with the Aussies taking on the French in the quarter finals. That game should, if the calculations are correct, be on at 5:06 pm AEDT.

If that battle is won, then it’s on to either Fiji or England at 8:50 pm. All the fixtures can be followed here.

Earlier in the week, rugby.com.au ran a little piece about the team and here are some quotes from Walshy Walsh.

“Our preparation has been excellent, with convincing wins at both the Central Coast Sevens and Oceania Sevens tournaments,” Walsh said. “The team is really looking forward to representing their country on the World Series again.

“The entire squad understands our recent success will make us the team to beat going into the World Series and this is a challenge we are really looking forward to overcoming.”

“It’s been pretty unreal since we won the gold. We’ve had young girls coming up to us and saying ‘I want to be just like you.’ But winning the mothers over has been the best thing to come out of it. Hearing them saying they will put some headgear on their daughter and let her go and play rugby has been just awesome,” co-captain Sharni Williams said. 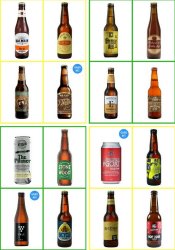 There’s only one thing better than watching a clinical David Pocock pilfer, and that’s drinking some craft beer while you watch your rugby. Green & Gold Rugby has teamed up with The Craft Beer Market to offer a stonking deal for you. For $84 delivered, you can get your hands on 16 of the finest craft beers around. This pack has everything – pilsners, pale ales, Indian pale ales, golden ales, bright ales, double lagers (if there can be Two Dads, there can be double lager, right?), wheat ales, chardonnay IPAs, and summer ales. All you have to do is enter the code “GAGR84” to receive your discount on a lineup of beers that would give the current Wallabies XV (plus coach Cheika) a run for their money. CLICK HERE TO ORDER DELICIOUS CRAFT BEER NOW