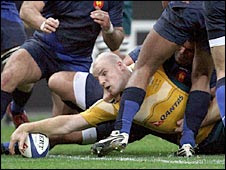 It was ugly as hell (and that might have been because it seemed like I was watching it underwater through a snow blizzard on an intermittent webstream) but stuff it, it was a win.

I get the feeling there will be plenty to pick apart when I get to see a decent version sometime tomorrow, for starters:

Should David Skrela not have had his biggest melt-down since the RWC last year, we would have easily been toast. He kicked one from six penalty attempts.

The method to our kicking madness was that yet again the Wallaby defence was awesome, forming a brick wall on the half way line that the French struggled to ever get past.

What was puzzling about the kicking game though were the inroads we were making through the middle of the field, yet again spearheaded by Mortlock (or was it Moore or even Palu…? hard to make out…)

The second try was an absolute peach of powerful running and quick phase recycling. I have a feeling the first was as well, but could only see a Wallaby coloured blob that I’m told was Moore get over from about 5m out.

So at last the Wallabies win one of those tight games that they’d got into the habit of losing. The fantastic news is that it means Australia has now won 3 back to back tests on the road. The first time since 2000, which was also the last time we won in France. The game might have been ugly, but these facts will look like Scarlett Johanson with her ankles behind her ears to Deans and his men, and to me. 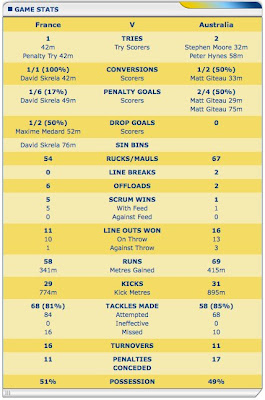 Can the magic continue? France v Wallabies Preview
Battle of the Hemispheres