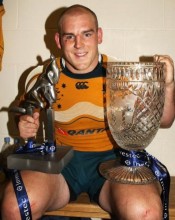 It feels like unfinished business unless we go through the Wallabies on tour, sum up their performance and see what we’ve learned for the future from them.

Ben Alexander – good first steps but more time scrummaging required. Is he going to finally start for the Brumbies?? 6

Alastair Baxter – gotta be the most satisfied sportsman in Australia right now after the Twickenham vindication. Now a bit lonely with along with Robinson as our only international class props. 8

Richard Brown – hit and a little more miss on this tour. Lacking height/weight of a modern 6 or 8, definitely got something though. 5

Mark Chisholm – another tour reformation. Has actually turned into a lock, he should never talk about six again. 7

Matt Dunning – was having a good day against the BaaBaa when his international career ended, but was obviously not at the top table in Dingos reckoning. 5

Adam Freier – as usual was full of beans when he finally did get on, but there’s only so much he can do with his frame. Injury meant not really enough time to rate.

Peter Kimlin – poor bugger. Got to see Europe I guess.

Hugh McMeniman – good energy but not a whole lot else. Fills in OK at six but definitely not a lock. Third in line behind Mummba and Elsom 5

Dean Mumm – has shown more of that x-factor of being in the right places at the right time. Always had a good game when at six. 7

Stephen Moore – internationally part of the derided Aussie front row at the beginning of the tour, now being lauded as the worlds best hooker! Fantastic line-out accuracy, key part of scrum and always making yards around the park. 9

Wycliff Palu – I’m sure hoping that Big Cliffy isn’t going to be chronically injured because the pack is completely different when he’s on the pitch. A key link in the team with no real contender replacement at present 8

David Pocock – obviously didn’t get a lot of time, but imposed himself in the BaaBaas game as soon as he was on. Think we’ll be seeing more of him than Phil Waugh for the Wallabies from now assuming Smith fit. 6

Tatafu Polota-Nau – not a lot of time out there, but took his opportunity against the BaaBaas and had a belter. If he can throw and play like that in a real international, then we’ve suddenly got a hooking glut. 6

Benn Robinson – the other prop at the top of the Wallaby tree. Turns out performance after performance which includes the hardest yards in the loose 8

Nathan Sharpe – what an incredible reformation. I still can’t believe the tackles and rucks I saw him hit to go with the scrum and line-out performances. Was it the dropping? Is it the beard? Can he keep it going? 9

George Smith – he is the worlds best seven, where was McCaw for the BaaBaas? While the new reffing obsessions didn’t suit the real scavangers, he upped his tackle rate, running rate and leadership (gutsy Aussie team performance vs the Barbarians noted) 9

Phil Waugh – never really did that much wrong, but then never managed to fill Smiths shoes. 5

Adam Ashley-Cooper – hopefully the experiment at 15 is finally over, because he looked a million dollars when back at 13 or even 12 (interestingly). However, fullback is a no-go. 6

Berrick Barnes – darn it, no rating! If he’d had time on the pitch, the 10-12 combo might have been switched around by now

Quade Cooper – looks like he’s taken on a level of maturity that can do him no harm. While he was winning the Italian game and steering the BaaBaas match, KB was at home eating fried chicken. 7

Sam Cordingley – a trip too far, but always tried when he got on. 6

Ryan Cross – some poor decision making until the final match. Probably has another season in S14 to sort this out. 6

Matt Giteau – forgetting everything else, his goal kicking was vital. He also slowly grew into the play maker throughout the tour, although not quite there yet. 9

Peter Hynes – a solid player, but I’m now convinced the Queensland conspiracy for McMenimen has refocussed on Hynes. Misses the zip that Ioane brought. 6

Digby Ioane – showed the rest of the back 3 up for bustle and pace. Made things happen when he came on 7

Drew Mitchell – while never going to be a worlds best at 15, he was a hell of a lot better than AAC. The fact that he and tries go together is also no mistake. 7

Stirling Mortlock – diss Morty at your peril. Through pure strength of character he almost made the bodge job at 12 work. Is the guy oppo backlines fear the most (ask Ricky Flutey) 8

James O’Connor – what a pair of cahones on this kid. Definitely has the x-factor and needs more international game time. 7

Brett Sheehan – my non-Aussie mates at the BaaBaas asked who the chubby number 9 was. Did OK when on.

Timana Tahu – he’s going to need a very good season at the Tahs to overcome the problems, both injury and game reading, that he presents. Not enough to really rate, but what was there wasn’t that flash.

Lote Tuqiri – carrying the team bags all those games obviously didnt hurt. Especially strong defensively when got back on the field. 7

Lakky Turner – not really enough to rate, but seems to be in no-mans land within the squad.

Coaching staff – considering the injuries before and on the tour, they did the best with what they had.Their hand may have been forced a little, but plenty of young guns also got important runs, especially at the end.

The fitness and mental toughness injection they gave the squad in the training camps was impressive. Foley and Williams’ work with the forwards both at restart and in the loose was standout.

A massive improvement from the very mixed tri-nations. 8