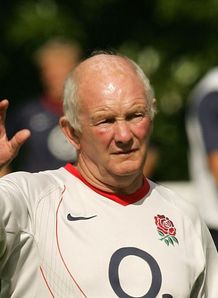 Today the poms – under coach Brian Ashton – announced their 30 man squad to go to France. As these guys could well be more than just a big banana skin in the Wallabies’ path at quarter-final time, it’s worth having a squiz at who we could be up against.

The forwards are a pretty impressive lot with names like Shaw, Sheridan, Stevens, Regan and Dallaglio to name a few. What’s missing though is a world class 7; a big omission with some of the open-side names that will be floating around the higher end of the tournament.

Far more sketchy is the crew of backs. With Charlie Hodgson, the first choice 10 since Wilkinson’s disappearance after the last world cup, still too fresh from injury to make the squad, there’s a big hole behind Johnny. There is also what you can only call an unformed mess in the centres. The still to prove himself Farrell makes the cut, as does the new boy Hipkiss and the senior citizen Catt. Noon has proven a stout defender, but not much more and Tait, probably the most talented of the bunch is yet to be harnessed. The Marseilles test will be fascinating.