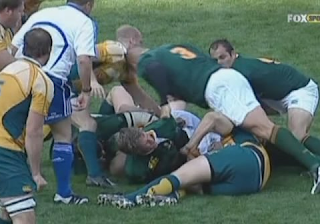 As we all know the key thing about rules in sport is that they’re applied consistently. However, the bans resulting from the citings of CJ Van Der Linde (4 weeks) and Rocky Elsom (1 week) last Saturday open up some inconsistencies that you could drive a bus through.

First off, the head-butt from CJ. In case you missed it, here’s a little replay for you.
As you can see, this idiot uses a ruck as an excuse to put a cheap shot on a guy who wasn’t even looking at him. As Cordingly understated himself,

“The first time he had come at me I had seen him coming, and before the second occasion I started to back away because the referee told me to release the ball, so luckily it was more of a glancing blow than a direct strike.”

In my mind 4 weeks is a minimum, especially when Epi Tione got 8 weeks on a sighted opponent.

However I can think of a recent game, in Perth just last month, where another Springbok forward – Bakkies Botha – took a running leap at an unsighted opponent in a ruck, the only difference being that Botha succeeded in concussing Stirling Mortlock, literally knocking him out of the next game.
There was no way this was an accident either, you can see Botha check his handiwork afterwards, and even try the same thing in a previous ruck. For all that’s holy – how did this not get cited as well?

And then you’ve got Rocky Elsom, competing in the air directly opposite Matfield during a line-out. As you can see, Rocky does grab Matfields arm, de-stabilising him, a fair enough penalty, which it received.

However, we’ve all seen this game in game out, but never cited. It’s not like Rocky barrelled Matfield’s legs out from under him – he was in the air with him. You can see that the Aussie 6 actually falls on his arse under Matfield, which is probably why he pulled so hard on the Saffa’s arm.

As has been noted around the place, if this was a citing, what about Steyn’s hit on Mitchell in the air (below)? Sure, Napoleon Dynamite only managed to injure himself by head-butting Mitchells knee, but this was far more reckless and dangerous than Elsom’s tangle in the air.

To cap it all off, this SANZAR shower took three days to get the the shabby job done, stifling any chances of appeal (verdict not available till Wednesday) or replacement – Elsom’s been fully involved in training this week.

If it wasn’t supposedly a professional sport worth billions, you’d think it was a joke.