Eagles claim the silverware against the Rams in Concord Classic. 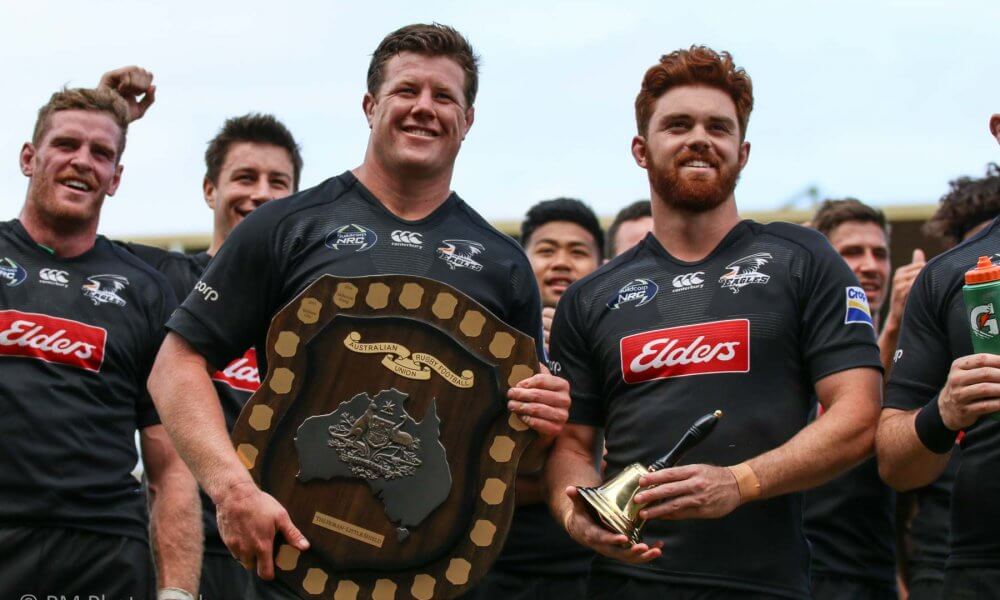 Eagles claim the silverware against the Rams in Concord Classic.

The NSW Country Eagles have all but clinched the Minor Premiership while securing the Horan-Little Shield and Ben Robinson Bell, scraping out a 44-40 victory against the Rams in a thrilling contest at Concord Oval.

Arriving at the ground, fans were treated to a great islander-flavoured atmosphere. Once again, the Rams management had done a wonderful job with organising and running the day. It was a real celebration of Pacific pride, with stalls, dancers and even a Pacific Fashion show the highlight of the pre-game entertainment. They had drawn a great crowd too. The hill was packed and the western stand very respectable. I personally estimate over 3,000, but many more came in during the game in preparation for the brutal NSW Tonga vs Fiji game straight afterwards.

The wind was blowing, and clouds were brewing in the south-west, but the sun was shining when both teams took to the field. Both teams were nervous to begin with and struggling to adapt to the conditions, dropping the ball and struggling with the strong winds. While there was a great battle on show at scrum time, it took something special to open the scoring, which the Rams provided when Tyrone Viiga was the recipient of some individual brilliance from Paul Asquith. 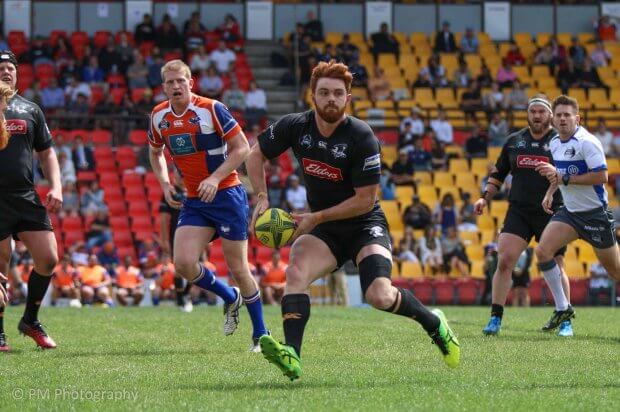 This try sparked both teams into action, with the Rams defence making the Eagles force silly mistakes. Reece Robinson however was flawless, getting the Eagles first points of the day by crossing over for a fantastic long range try. Conversions were extremely difficult to come by in the windy conditions, so the scores remained 6-6.

After Sam Figg was yellow-carded for consistent offside infringements, the Rams took control of the game through an outstanding pushover try to scrumhalf Waldo Wessels. A second sensational try to Viiga from a rolling maul started in the Eagles 22 had the Rams rampaging 20-6. The Eagles heads were down, but it was a special effort from Country-Eagles stalwart Andrew Kellaway and Reece Robinson to set up Folau Fainga’a for a try to get them back in the game.

The momentum then shifted again back to the Eagles when Robinson produced a bit of magic to put the Eagles into a dangerous position, that was rewarded when Sam Ward crossed over. With the conversions successful, the Eagles were out to 20-22 lead. Tensions were starting to build between the two teams, and it was just as well the halftime break came quickly.

The Eagles continued their dominance early in the second half, with Jake Gordon grabbing a try in the 43rd minute, and their lead now out to eight points. But then momentum shifted again. The Rams were beginning to realise that if they didn’t step up, their season would be over, Turning to their rolling maul, their stalwart try scoring machine Brandon Paenga-Amosa crossed over. With the conversion unsuccessful, the margin was back to 26-28. Their defence also was beginning to measure up, with the players getting up and aggressive in the Eagles face. It was the makings for a thrilling finish. 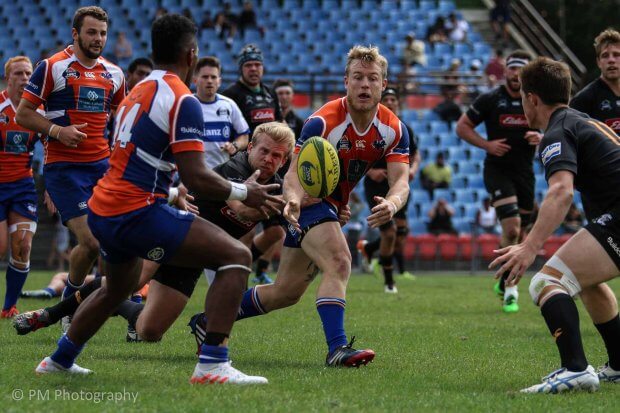 This aggressiveness proved to be the Rams undoing, when Tyrone Viiga was sent off. The final twenty minutes was a see-sawing affair (much like the entire game), with the lead changing numerous times. Smart scored for the Rams. Then Gordon for the Eagles. Then Minute for the Rams. The conversions were what was keeping NSW Country in the game, but they were running out of time, the score 40-36 in favour of the Rams.

Then, up stepped skipper Paddy Ryan, who managed to bust through the Rams defence and grab his first ever try of the NRC. With the conversion successful, the Eagles found themselves ahead 40-44, leaving the Rams two minutes to come up with a match winner. They’d done it in thirty seconds two weeks ago, but alas the Eagles forced a turnover and won a minute after fulltime. It ended what was a stellar contest between two very evenly matched sides.

With that victory, the Eagles finish the season as winners of the Benn Robinson Bell, Horan-Little Shield and (most likely), the minor premiership. It was a courageous victory against a quality opposition, and a victory will prove to be extremely valuable for their momentum going into their match next week in Newcastle.

While it was sad to see the Rams end their season in this way, their effort and commitment today (much like in every game this season) was to be applauded. They promised they would turn up to play, and that they did. I can only see the Rams going up after this season, they were truly something special to watch. 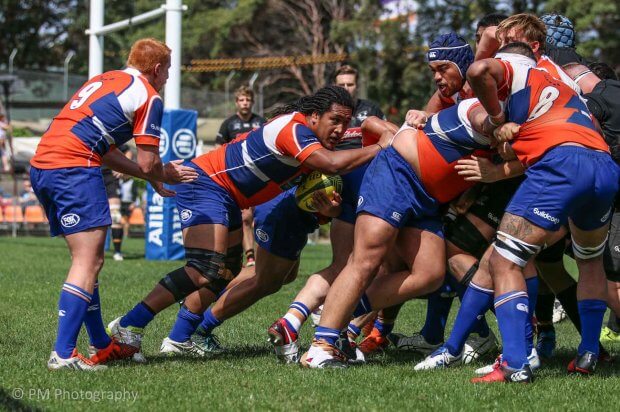 Brandon Paenga-Amosa at the back of a maul.

These sides were so evenly matched, it seems appropriate to view that the sending off of Sam Figg of the Eagles in the first half and Tyrone Viiga of the Rams in the second half proved to be beneficial for both sides, contributing to changes in momentum for the opposition team. It was a thrilling and seesawing affair, and the only thing that split them at the end of the match was the conversions. Goes to show how important kicking is in this game.

He has been stellar all season for the Eagles, and he proved to be the spark that clicked the Eagles into gear in this game. Reece Robinson had an outstanding game, playing a role in two of the three first half Eagles tries, in addition to picking up one himself. In what was a great display once again from the Rams forwards, I was most impressed with big Will Skelton. So often his discipline has let him down, but today was one of the most disciplined and focused performances I’ve seen from him, with him busting multiple tackles and giving the Rams the go-forward to threaten the line. Finally, Tyrone Viiga completes the Top 3. He was in contention for MOTM with his truly remarkable first half performance, but a head knock and yellow card in the second half impacted his influence on the game.

God, there were a lot of good performances today. Brandon Paeonga-Amosa was (as he always is), stunning for the Rams, having an almost perfect day at hooker (even more amazing considering the win) and bagging a try. Get the man a contract. Somewhere. He’s that good! The same can be said for his opposite number, Folau Fa’ainga, who had a strong outing for the Eagles. Waldo Wessels stood out for the Rams at halfback, grabbing a try and proving a pivotal influence in the team, and finally Albert Nikoro had many great runs for the Rams, and looked like an imposing figure to deal with at fullback. It was wonderful game with many, many good performances. 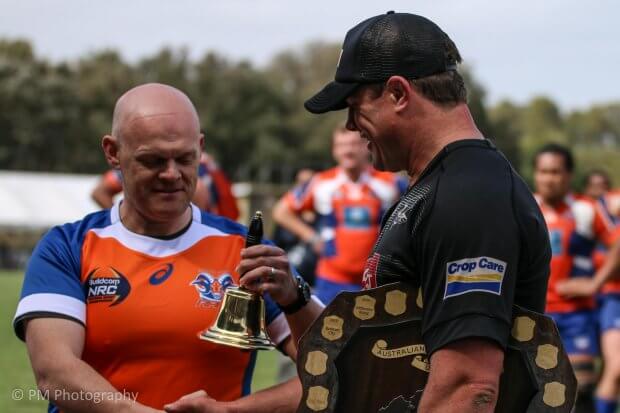