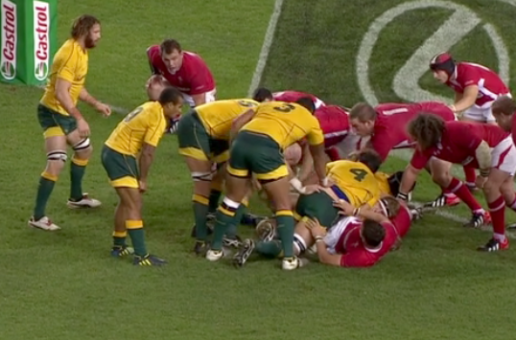 I saw the game live at Etihad Stadium and I had lousy seats – side-on and low down. I’m now travelling in Tasmania and I’ve been unable to watch any replays, so I’ve some difficulties in writing an accurate assessment of the match. (Let’s not play the obvious game here!)

I’m going to give my summary impressions now and, if anyone’s interested, I’ll add more later in the week, but probably not until Friday.

This was a valuable series win for the Wallabies. They are playing the Six Nations grand slam champions, who had also won many fans with the quality and style of their play at the World Cup. The Wallabies were without their three backline stars – Beale, O’Connor and Cooper – plus Mitchell and Turner. A few injuries up front — Horwill, Elsom, Vickerman, Timani — added to the selectors’ woes. On top of this, there have not been many displays during the Super Rugby season that have given us grounds for optimism. So, all in all, the coaches can take a bow, I reckon — and it’s a while since I’ve said that.

I thought that we played better again, following our first Test win. We all thought that Wales would improve over their shoddy first game – and they did! We needed to get a late, flip-the-coin penalty, as the ref was handing them out, to get the result, but, overall, I thought that we deserved it. We were always more likely to score tries, I thought. Our play was more constructive — and it’s a while since I’ve said that also.

My specific impressions were:

We’re making progress and, if we keep going, we’ll eventually reach our destination. We have the potential, with all hands on deck, to be very good.