During last week an Australian rugby journalist called me for some comment on the coming first Test against Wales, the Six Nations Grand Slam champions. ‘There is no way that I can see for the Wallabies to win,’ I replied. ‘Our scrum, our lineout, our midfield attack, our counter-attack, even our back row — I can’t see any area with a significant enough advantage on which we could build a victory.’ 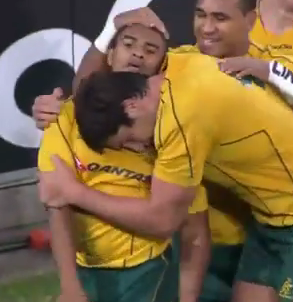 Wrong again, I’m happy to admit. We were well worthy of the win. David Pocock completely outplayed Sam Warburton and with great support from TPN, Rob Simmons, Nathan Sharpe and Wycliff Palu, the forward pack did what was required to give Will Genia the quick recycle and the opportunity to show his world-class ability. Sekope Kepu was again improved, but, along with Benn Robinson and Scott Higginbotham, needs to do much more.

Having said that, this was the best I’ve seen from the Wallabies forwards — in an overall assessment — for some time, with much improved urgency at the tackle contest. If we can get another lift in accuracy — and urgency from the three named forwards — we have a real foundation to build on.

Barnes played well; he didn’t look anything like the flyhalf who played on Tuesday night against the Scots. He played a lot flatter and contributed to the questions that the Wallabies posed, right across their attack. His kicking out of hand returned to the high standard that I commented on a few weeks back and he consistently carved off large chunks of territory for his team. Ioane played on an 80-minute high and was a constant threat. He did make a couple of errors in the back-three role, but he could certainly not be questioned on his enthusiasm. AAC was great at fullback; I think that it’s his best position, even though he plays well wherever he’s selected. Now, if we can just get any two of the three injured superstars on the paddock together, we should be able to threaten most teams.

When interviewed after the game, Sam Warburton said that ‘the game was played at a great pace and intensity, and we struggled to keep up in the first half’. Brian O’Driscoll also mentioned the pace of the game — completely understandably, given the pace and intensity of the All Blacks performance. England clearly succumbed to the Springboks’ third quarter lift and Stuart Lancaster cited the same high tempo of the opposition game.

Given the consistency of these comments, it must be that the Northern Hemisphere teams were somewhat taken by surprise and they appear to think that they are now better prepared for their next encounters. In my opinion, they’ll need to be just that, because I think that the Wallabies and the Springboks can lift the consistent pace of their respective games by some amount.

Ieuan Evans, the former Welsh and British Lions winger, had predicted that a first-up win was a real necessity for Wales, but I’m not so sure. The accuracy of their play was way below their normal standard and we should expect a big improvement by next weekend. Given that they put around three genuine try-scoring opportunities on the ground with unusually poor passing, an improvement here could make a considerable difference on the scoreboard. Further, neither Toby Faletau nor Dan Lydiate played up to their excellent Six Nations form and I’m expecting a lot more from them next week — on the other hand, perhaps the Wallabies didn’t let them play well. We’ll see!

Of much more concern to the Wallabies, I’m sure, was their 50th-minute, Waratahs-like slump that allowed the Welsh back into the game. With the score at 20-6, following Barnes’s well-taken drop-goal, the Wallabies lost the restart; then their lineout throw was not straight; then a penalty and three points to Wales; then another penalty to Wales from the restart; then a try to Cuthbert, plus the conversion; then another successful penalty. So, for a period of twelve minutes following the drop-goal, the Wallabies completely lost control of the game, allowing Wales to close the gap to one point. This, to me, shows a lack of game understanding on the part of individual players, a lack of focus and a lack of leadership, and it remains most concerning!

Thankfully, the ship was righted — well done — and the Wallabies finished the game on top. The stat of three tries by the Wallabies compared with three tries in total against the Welsh in the whole Six Nations speaks for itself.