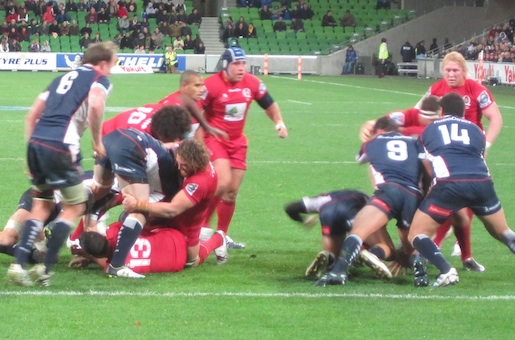 This was a crucial weekend for the many Super Rugby teams. With nine teams fighting for the top six play-off spots and three fighting to avoid the wooden spoon, one slip had the potential to be crucial. Often in such situations, with the outcome so vital to a whole year’s endeavour, the contest becomes stodgy, with none of the combatants prepared to risk anything. Such was not the case this time, however, and the ambition and endeavour across the board was pretty much the opposite. We saw some great rugby.

The Reds needed the win, of course, but also the four-try bonus point if they are to remain any chance of overtaking the Brumbies for the Aussie conference lead, or even to sneak one of the bottom qualifier spots. They were away to the Rebels but this fixture is not an automatic five points – just ask the Crusaders. Indeed, for the opening 10 or 15 minutes, the Rebels applied all the pressure, but the Reds weathered the storm. When the Reds finally got the chance to fire a few shots of their own, they didn’t miss and, by the break, they had scored three tries for a 24-3 lead.

Accurate execution of being shitscared

What was the difference? Accuracy – accuracy of execution. When you have an opportunity, even the chance of one, you cannot afford to squander it with inaccurate play. Accuracy in the pass and accuracy in positional play in support are two of the most vital areas for quality execution in attacking plays. By and large, the Reds were accurate and the Rebels were not. Quade Cooper was special for the Reds.

As I watched the first half, I kept repeating in my own mind, ‘accurate (pass)’, ‘accurate (pass)’, over and over. Again I noted, accurate positional play in support  – AWH in depth for Cooper’s delayed pass and his try; Shipperley in perfect position, around two metres inside the ball and about four metres behind, for his. Such simple fundamentals are neglected, more often than not, but they are essential to quality performance. Moreover, they are easy to execute and, in general, the opposition can have no influence on your play – all you have to do is pay attention to the simple key principles!

Quade Cooper was outstanding – on a different level! When he gets back to the Reds – and, dare I say it, to their coaching staff’s concentration on (again) the fundamentals that underpin performance — his huge innate, intuitive talent can show right through. It was a great team display by the Reds in the first half. I thought that Simmons and AWH (as always) contributed well up front and Mike Harris is beginning to look like his 2011 self again.

The Rebels, as they often are, were a different team in the second half, although much of their success came when Kurtley Beale was at first receiver. He is another genius and you can add the adjective ‘courageous’ to any description of him. Although clearly struggling, he never gave up trying to lift his team – whatever they’re paying him, he’s worth it. The Rebels have some qualities. I reckon a couple of decent props and another hooker (unfortunately, they don’t grow on trees) and they’ll be a different team – for both halves. Adam Freier was, as usual, a fourth backrower for his 30 minutes; unfortunately, his throws let him down.

So the Reds laid down the gauntlet to the Brumbies and the Brumbies took it right up. Despite the emotion, or maybe because of it, the Brumbies shot out of the blocks. Jesse Mogg showed surprising (to me) pace for a try after 2 minutes; Nic White again showed his Gerrard-like touch-finder to go within six metres of the line; and Alexander scored a second try after 11 minutes. 12 to nil!