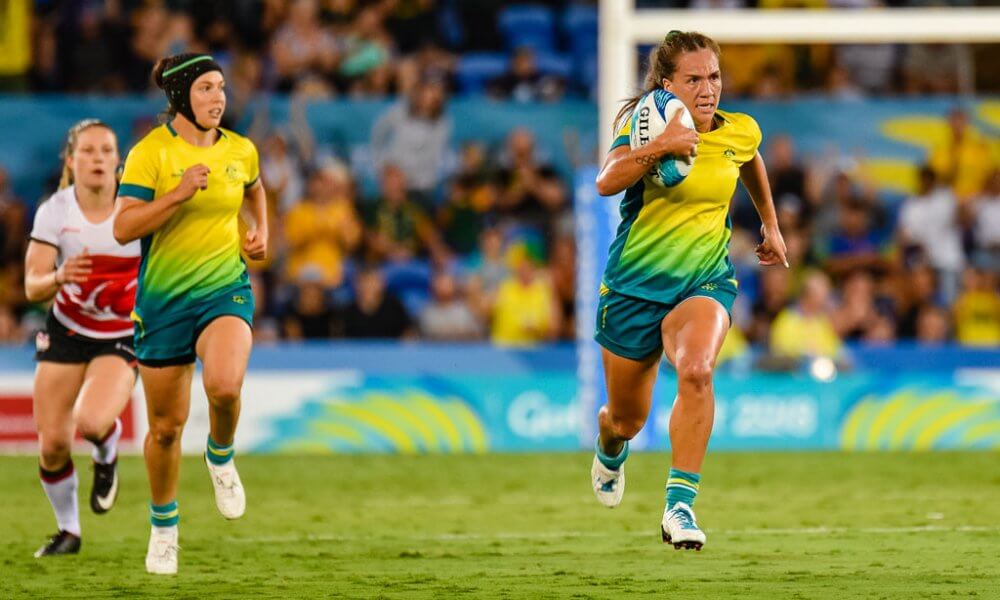 Our Men kick off their tournament at 9:31am AEST against Samoa, backing up against Jamaica at 1:11pm AEST.

Our Women step up for their final pool match against Fiji at 7:21pm, before the Men return for a blockbuster clash with England at 8:05pm.

Stay tuned here for our running coverage of Day Two! 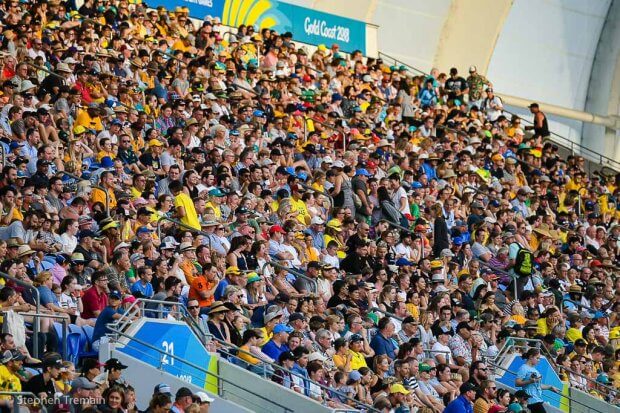 Australia’s men have been eliminated from Gold Medal contention at the 2018 Commonwealth Games, losing a vital playoff with England 17-26.

Neither side could claim any real advantage in the first half, entering the break tied with two tries and a conversion apiece.

England kicked into gear in the second half, striding out of multiple tackles to outscore the hosts 14-5 to close out an all-important win.

Only the winner of each Pool will progress to the Semi-Finals in the Commonwealth Games format, and England’s win tonight relegates Australia to second place.

Supporters at CBus Super Stadium had plenty of cause for optimism as Australia turned over possession deep inside English territory to open the match, charging in tight before firing wide for Charlie Taylor to score on the left wing.

English captain Tom Mitchell was shown yellow for slapping down a pass to a free man, gifting Australia an overlap for the next two minutes.

John Porch would take the full advantage, gathering a Lachie Anderson offload and diving over the line untouched out wide to lead 12-5.

A poor grubber kick was fielded safely by Norton, who set free Alexander Davis for a converted try in counter-attack upon the stroke of halftime.

English hooker Ruaridh McConnochie deepened Australia’s hole in the second half, skipping out of two lunging tackles to push ahead 19-12.

Aussie supersub Maurice Longbottom channelled his inner Damian McKenzie, goose-stepping to his outside to draw the final man and release Tom Connor for a simple try in the corner. John Porch’s kick was hooked across the face of the goalposts, leaving Australia with a 2-pt deficit with 2.5 minutes remaining.

The rangy English runners were soon back in, with Alexander Davis striding away from the defence to open up a 9-pt deficit that will send England to the Semi-Final, and Australia crashing out of it.

Australia may not have entered their final pool match as underdogs but they emerged giant-killers nonetheless in a thrilling 17-10 win over Fiji.

Outweighed across the park by an average of nine kilograms, the Fijian’s dominating physicality rattled the normally crisp ball-playing of their hosts through the first half.

It took a Charlotte Caslick miracle for the Australians to eek out a gutsy win in the face of a powerful opposition.

Australia’s lightning start, manifested in a Emma Tonneato try on first touch, may have created the illusion of security for the Aussies as their attack dried up.

Tonnegato may have thought she was in for two from two, but a spilled offload was swiftly recollected by Fijian prop Miriama Naiobasali and returned for an equalising runaway try.

Both sides remained locked in stalemate 5-5 as half-time sounded, with neither side able to impose their will on the opposing defence.

Charlotte Caslick rectified that situation with a long range strike from kick-off, running home a try from her own 22m line to reach a 10-5 lead.

Fiji hit straight back, with a second try to the surprisingly fleet-footed Naiobasali tying up the match once again.

A deliberate knock-down from Fijian hooker Pricilla Siata gave Australia a one-person overlap and with it the confidence to chance their arm.

Caslick proved the hero, splitting the Fijians from broken play to score a thrilling second try to steal back a memorable victory as time expired.

Australia will take on Canada on the semi-final, themselves defeated by New Zealand 24-7, before facing either New Zealand or England in the Gold Medal playoff tomorrow at 11:21am AEST. 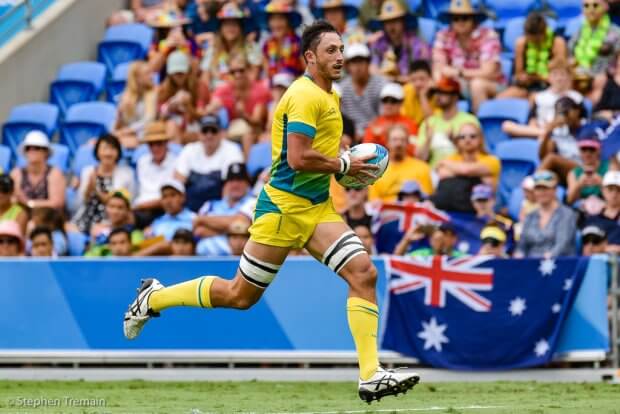 Three tries to Maurice Longbottom helped secure a 42-5 win over Jamaica in Australia’s second Pool B match of the Commonwealth Games.

Coach Andy Friend rang the changes for the litmus-test clash with minnows Jamaica, who fell to England 38-5 earlier this morning. Previous starters Boyd Killingworth and Lachie Anderson earned a spell on the bench, while lightning-in-a-bottle Maurice Longbottom replaced the banged-up Tom Lucas to great success.

Australia crossed for four tries in the first half, two in the second, and held Jamaica to one try against the run of the play in a confident showcase.

2018’s budding rookie of the year Ben O’Donnell scored his first try of the Commonwealth Games campaign in the opening minute, racing outside his man to touch down on the left wing. 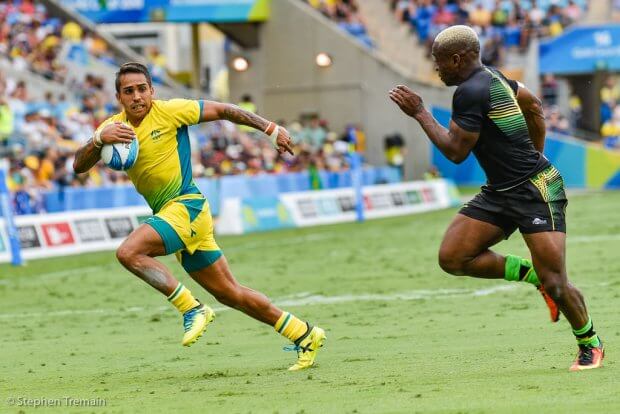 John Porch made amends for his earlier gaffe against Samoa by taking a Jesse Parahi offload all the way for his first try of the tournament.

Parahi’s offloading game was quickly dragged back into the spotlight, setting up Longbottom for another try on the right wing.

Jamaica pounced upon a dropped ball to run in one score upon final play of the first half.

A yellow card to Jamaica’s Nyle Beckett for a deliberate knock-down opened the field for Australia, launching a set piece move that sent Sam Myers through untouched for the side’s fifth try.

Boyd Killingworth was sent from the field with 10 seconds to go, but his teammates didn’t need him as Maurice Longbottom dived over for his hat-trick try. 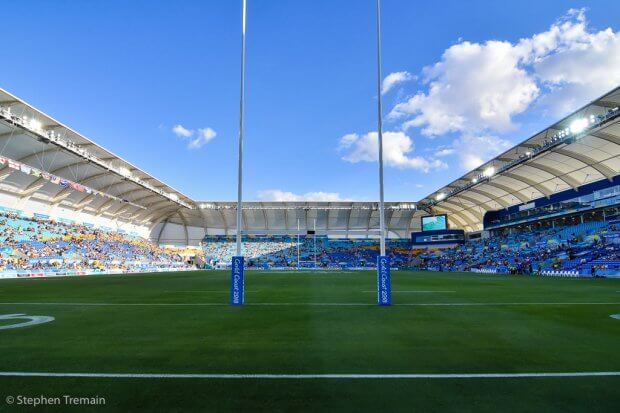 Australia’s Men have joined the Women in the undefeated column at the 2018 Commonwealth Games, defeating Samoa 24-7 in Day Two’s opening clash.

The Men’s team show little of the flash that characterises the women’s game, but the grafting, hard tackling identity instilled by departing coach Andy Friend was on show for all to see on the Gold Coast.

Samoa were forced to work hard to open their scoring account but the first half was Australia’s, 17-7, with a double to Lachie Anderson and a twinkle-toed scorcher from Maurice Longbottom.

A second half solo effort from substitute Tom Connor sealed the win, while the team’s defence restricted Samoa to no further points. 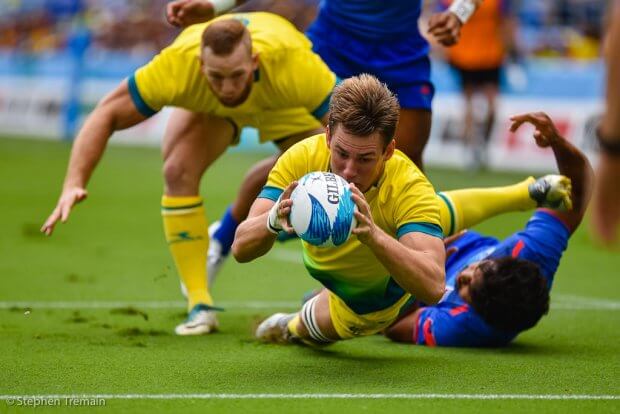 It’s often said that Sevens rugby becomes exponentially harder to defend the longer you must do so, and Samoa proved the cliche in spades through their opening possession. Australia’s defence cracked just once as scrumhalf Neria Fomai broke a tackle and jogged in a try, converted by skipper Tila Mealoi.

Anderson soon had a double, tackled short of the tryline before playing the ball for himself and lunging over the line to lead 12-7.

On final play of the half, livewire substitute ‘Moz’ Longbottom showed exactly why the Australian rugby fraternity has been so excited for his return from injury. Stepping out of multiple tackles, Longbottom broke clear of the chasing pack for his side’s third try. 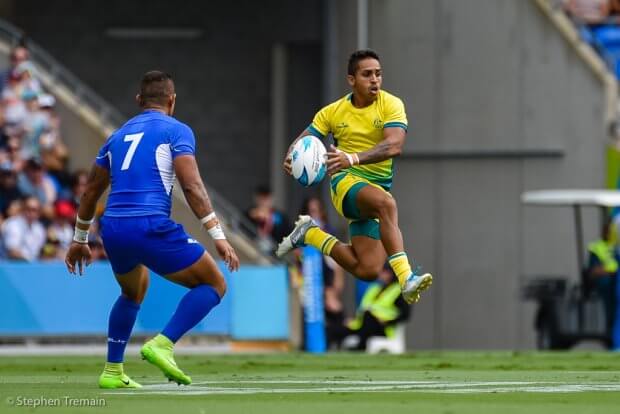 Tom Connor made immediate impact off the bench in the second half, winning a not-releasing penalty on the Samoan goal-line before powering over the line himself.

John Porch went close to adding a try, cutting Samoa back against the grain to find himself in space down the sideline only to lose his balance over the sideline.

Samoa were down for the count and failed to reproduce their sustained pressure of the first half, no doubt to the chagrin of legendary coach Sir Gordon Tietjens