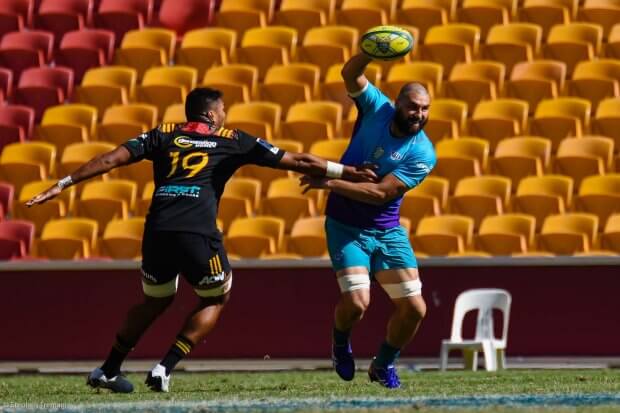 Jacques Potgieter with his new Scott Fardy hair style and the music boom box pumping up the Bulls into the vibe of the Brisbane 10s. This enthusiasm should grab Bulls’ fans in 2017

The Bulls are the only South African team to have won any version of Super Rugby.  They have been in the final only three times and won all of them.

This was in a golden period from 2007 to 2010 and their fans will want them to get back to those good old days.

The Bulls are located on the Highveld in Gauteng Province. It’s at an altitude of 1,340 metres above sea level – about the same as Thredbo Village in the Snowy Mountains. Gauteng is about half as big again as the Greater Sydney area, but has about 13 million people.

The province has several provincial unions including the Lions whose ground at Ellis Park Stadium in Johannesburg is roughly an hour’s drive from the Bulls’ home ground of Loftus Versfeld in Pretoria. (Add the ground sponsor’s name in if you like.)

Pretoria is a University city and the executive branch of the Republic of South Africa is based there. It has a population of 700,000. Sounds a bit like Canberra, doesn’t it?

Wiki advises that languages spoken in Pretoria include 48% Afrikaans and 16% English. The Bulls also cover the huge north-west province of Limpopo (Wiki ref: 97% black African). The Bulls are a well-established union that stretches out into more remote areas of indigenous population.

The altitude on the Highveld lends itself to rugby that features the set piece, kicking, penalties and wearing out an opposition inevitably suffering from oxygen deprivation. 10-man rugby is a logical strategy at Loftus. It is steeped in their traditions as though harking back to the old days when the Vortreekkers were circling their wagons into a laager for defence at night on their long journey north.

The Bulls have shown remarkable confidence in their coaching pathways. Head Coach Nollis Marais started with local varsity teams, Under 21 and then the Currie Cup. He had reasonable success with the trophy cabinet also. 2016 was his first year in Super Rugby where he brought a mandate for ball-in-hand rugby. Yes – it’s a work in progress.

Pre-season training in 2017 has focussed on conditioning (no need for altitude training rooms here), broken field play and quick ball. Marais has a close eye on the Kiwis who they meet in the Super Rugby draw for 2017.

Lood de Jager – playing for the Bulls this year

The flavour of the team feels much like 2016 but there has been a lot of movement.

African squads tend to be huge in pre-season where Under 19, Under 21 and Currie Cup squads are merged. In this broader group, some 26 youngsters are listed as making it from the Bulls’ Academy and the Blue Bulls (the domestic Currie Cup organisation).

Hooker Adriaan Strauss may miss the early season with injury. Jacques Potgieter has returned from injury as has Springbok Handre Pollard (finally!) who is said to be fit and sharp. The Bulls should step forward with the experienced playmaker working the “play what is in front of you” theme.

Strauss and Pollard will share the captaincy but note that former Springbok Under 20 captain Hanro Leibenberg has also stepped into the leadership role in the pre-season trials.

Handre Pollard will be back in action in 2017

In spite of the emphasis on free-flowing rugby, the Bulls will do well to take their defence from the Currie Cup into Super Rugby this season. And the set piece must continue to demand respect.

Marais has said: “Our aim is 2018 but if we win this year, then why shouldn’t we give it a shot? But the play-offs have to be made.”

The Bulls are in the Africa 1 Conference and they play all the Kiwis teams this year, as do the Stormers. The Bulls need to win the Conference because wildcard status will likely be earned by the second-placed team from the Africa 2 conference, because they play against the easier Australian teams in 2017.

It’s not as big an ask as it sounds. It’s like the old joke when two hikers meet a huge grizzly bear on a path and one takes his training shoes out of his knapsack and puts them on. When the other guy says he’s crazy because he will never be able to outrun the bear, the first guy says: “I just have to beat you.”

The Bulls just have to beat the Stormers.

The Bulls have one home game in the first seven weeks. Early away games include a must-win fixture against the Stormers (away) in Round 1, and then a New Zealand tour; so the Bulls may be slow out of the box. Marais has a massive job to keep up team morale until they settle into their home games.

There is a fascinating final round – the Stormers at home. The conference winners could easily be determined in that match.

The Bulls were clearly behind the Stormers in the Africa 1 Conference last year and they got pipped by the Sharks for the Wildcard spot even though the Bulls played the Aussies sides and the Sharks, the Kiwis. They completed the season being runner’s up in the Currie Cup, which is often a good indicator of form going forward at the higher level.

A trial against the Lions in Zimbabwe was not very useful as a form indicator since the Lions played many youngsters, though they won comfortably. Last weekend they were pleased about making the quarter -finals of the Brisbane Tens at Ballymore. The Bulls stuck to their set piece but gradually opened up during the competition.

By all accounts they enjoyed the experience and returned to Africa buoyant.

I’m calling for the Bulls to start slow, finish fast and top the Africa 1 conference ahead of the Stormers. That should please Nollis Marais and the fans who will both realise that it’s only a first step and that the experience of finals footie will help them peak in 2018..

* Overall position ignored, as being irrelevant.