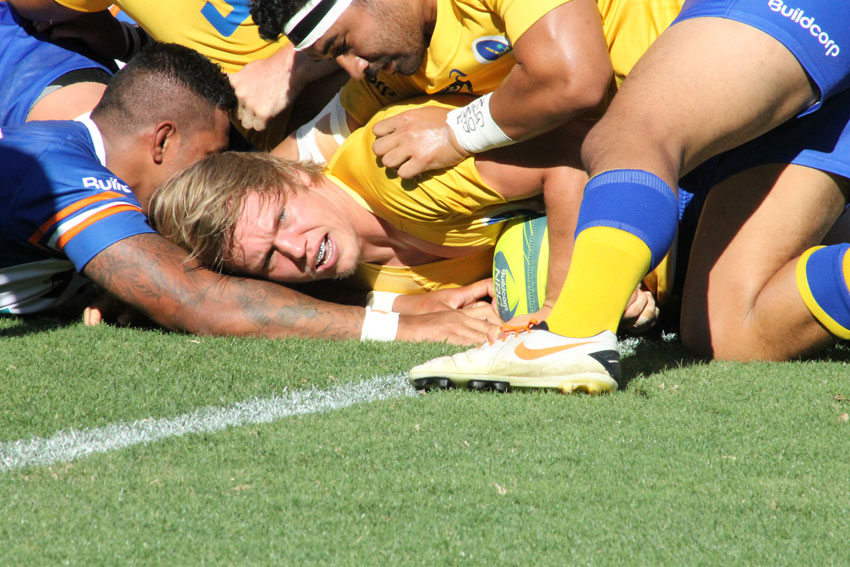 The final round of the Buildcorp NRC saw the unbeaten Brisbane City team take on the Greater Sydney Rams at Ballymore.  It was perfect Saturday afternoon rugby weather as City looked to finish the season unbeaten and retain the Horan Little Shield.

The Rams scrum was under early pressure as Brisbane City forced several early penalties.  The City side camped on the Rams tryline with several scrum resets before Adam Korcyzk took advantage of a Rams defense in disarray to crash over underneath a mass of bodies. Flyhalf Jake McIntyre converted.

The Rams then took another hit and looked to learn the hard way that you can’t give Junior Laloifi any space as he took a tight pass and scooted through a gap before offloading to Frisby who flicked to Kerevi, dotting the ball down underneath the post.

The Rams hit back with some solid forward play, led by Kelly Meafua.  Meafua led a strong attack on the Brisbane City line, working with his backs to put together some very cohesive play and patterns.  The intensity paid off with Meafua crossing for his own try after Frisby and Gibbon fell off tackles.  Frisby took a serious head knock in this play and came off not long after, replaced by Moses Sorovi who hadn’t had a lot of game time this year, but who stepped up impressively into the role of scrumhalf. 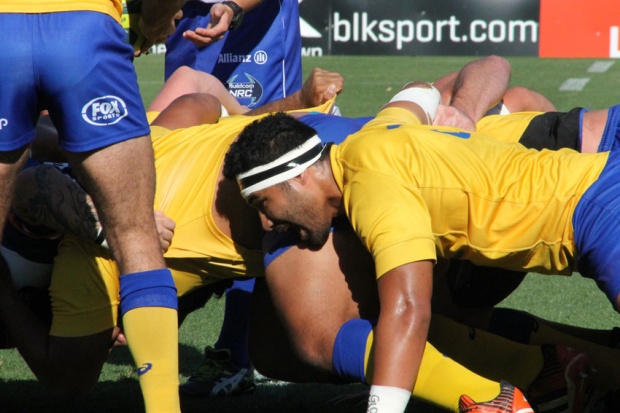 The Brisbane City team spent the next ten minutes inside their own half as the Rams put pressure on the line.  That turned around with a quick play from Gill to Kerevi to Laloifi.  Kerevi kicked ahead and the bounce sat up for Laloifi to run straight onto and cross.  Again, McIntyre converted successfully.  Another City try followed quickly with great backline play – the passing and trust between this City backline is impressive.  McIntyre offloaded to Hunt who held onto the ball for almost too long, but true to his impressive NRC form this year, Hunt read the play, accelerating, drawing two defenders before passing to Gill who offloaded to Gibbon, who crossed for Brisbane City in the 31min.

Gibbon’s fortunes turned with a penalty try to the Greater Sydney Rams awarded by Jordan Way (age 20) on his NRC debut that same Gibbon binned for 10 for taking the player out. The match was a very impressive display by May who some are tipping to walk in similar footsteps to an early Steve Walsh (before the hair obsession) who controlled his first international at age 24.  One to keep an eye on, so much so that the Hoff was cast in the supporting role of AR today.

Heading into half time prop Sam Talaki dropped the ball over the line as the result of a very solid tackle by Rams flyhalf Asquith. Nick Stiles, Head Coach of Brisbane City, after the match mentioned that the Brisbane City team ‘probably left four tries out there today’, and Talaki’s was one of them.  It was a sweltering day in Brisbane with temperatures at the ground over 35degrees, so it was with relief that both teams headed for the sheds.

The Greater Sydney Rams went in at half time still in touch with the Brisbane City team – they had some individual players who were absolutely stellar – Maefua, Roos and Asquith in particular performed well, but overall the cohesiveness needed to win tight matches wasn’t there.

The Brisbane City team came out storming in the second half with 5 tries inside 20 minutes – Hunt, Laloifi, Gibbon, Sorovi and Tela all crossed.  Laloifi, as always, skirted the sideline with the greatest respect for his try – dancing outside defenders to put the match out of reach of the Rams. 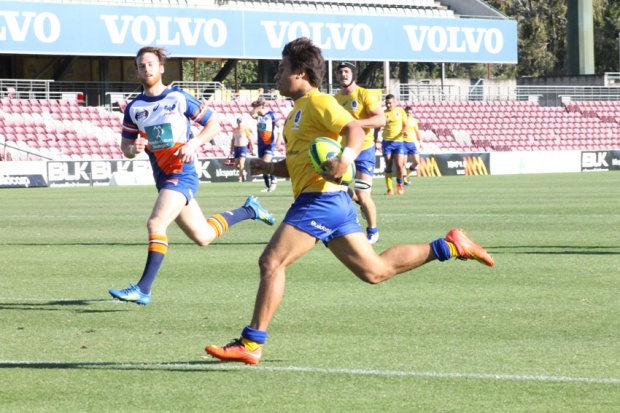 Nothing but net for Laloifi with a hat-trick. Photo credit: Chloe Krause

The Rams didn’t have the firepower needed to finish off the match and the heat had taken the toll with some rather lacklustre defence and chasing down of City players steaming towards the tryline.

Laloifi crossed for his hat-trick after the siren and his 14th try of a very successful season.

The QRU initiative of the Ballymore Kid is announce on Monday and Laloifi would have to be a strong contender from the Brisbane City team.  I would also nominate Andrew Ready who could be a natural replacement for the departing Chibba Hanson.

Brisbane City finished the second NRC season as minor premiers with an impressive unbeaten record and retained the Horan Little Shield.  Stiles, when asked about who they would play next week said that they would continue to focus on their own play, as they had all year.

Brisbane City have a home final next Saturday at 6.30pm with the opposition team to be determined after the final match between Melbourne Rising and Sydney Stars.

The period between the 45′ and 65′ minute showed Brisbane City’s class as the pulled away from the tiring Rams to score 5 tries in this time to the Rams one.

This was tight.  Laloifi certainly had a cracker with a hat-trick, but Samu Kerevi took it out with his own try and fantastic backline support play – his generosity at outside centre and some beautifully weighted kicks set up his teammates for some great tries.

Unsurprisingly Laloifi features here, and for the Rams, flanker Kelly Meafua was absolutely outstanding and Dewet Roos did well as both scrum half and kicker.