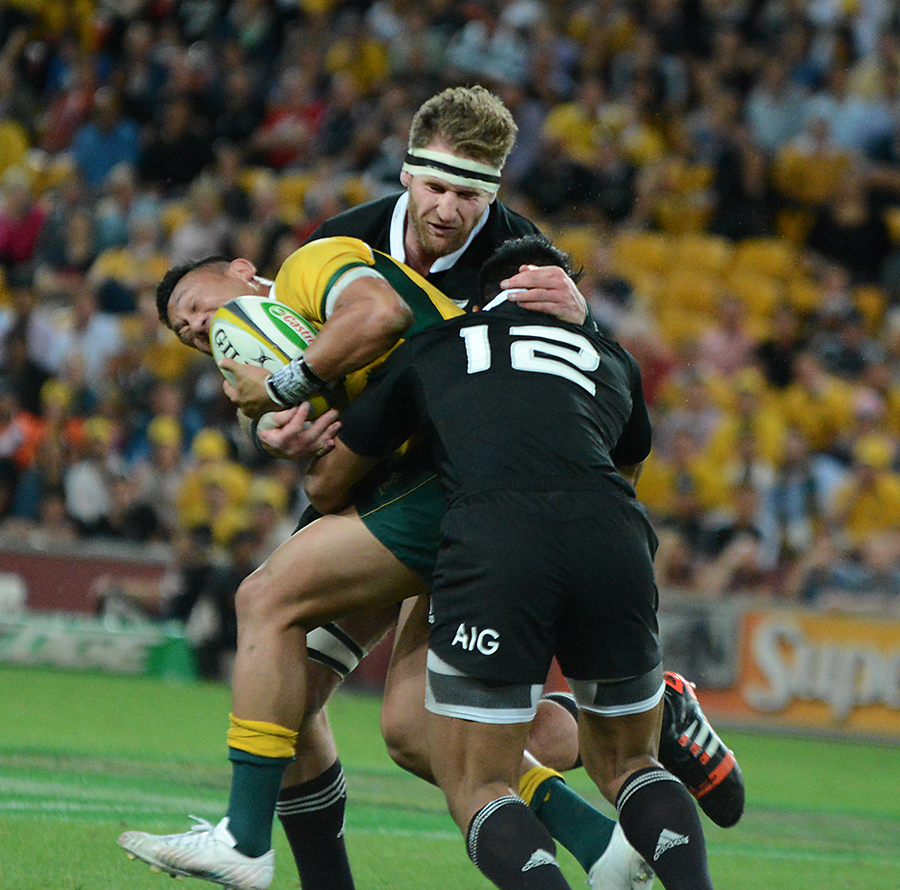 Well there has been a lot of comment and some very heated debate and of course the usual blaming of players. How about we actually have a look at some key moments where I think the game was actually lost.

72.50 The Wallabies have a lineout and the ball is carried midfield where the ruck is set. 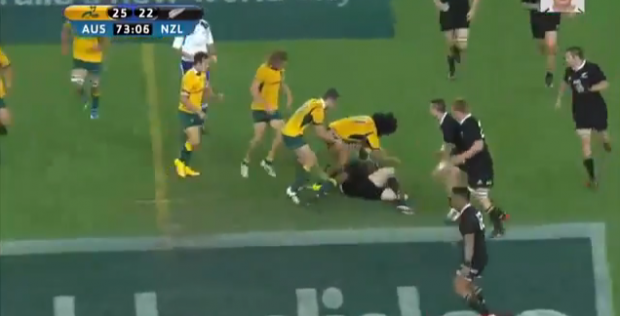 73.13 White runs from the base of the ruck across field and gets dominated in the tackle. 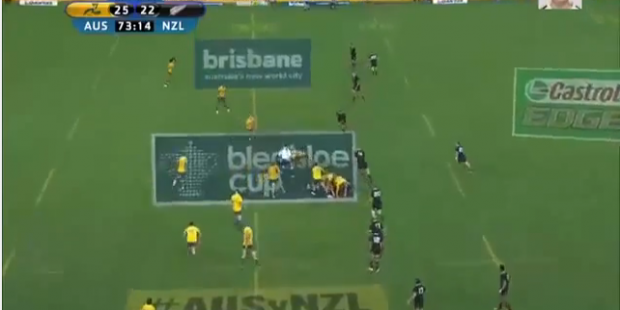 73.19 Pick and Drive by Mann-Rae who barely makes the gain line. 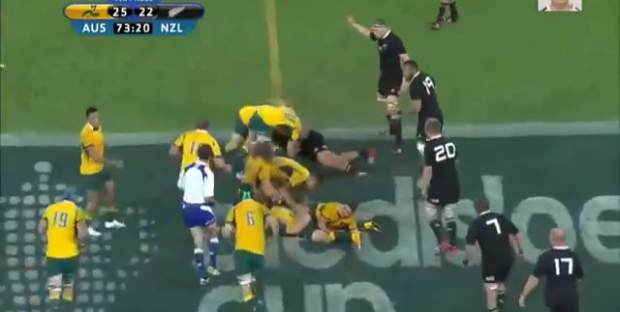 73.29 Pick and Drive by Alexander who is totally dominated in the ensuing tackle and is driven back two metres behind the gain line. Quick ball shoots out of the ruck under rushing pressure by the ABs, leading to a box kick by White. Poorly executed it is fielded on the full by Dagg who has all the time in the world with no runners. Kick return by Dagg goes out on the Wallaby 10 metre line. 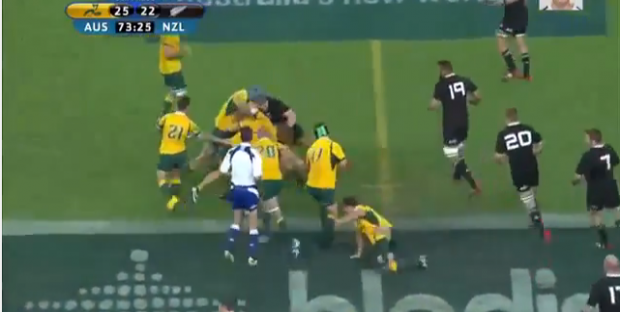 The forwards including the fresh Alexander and Mann-Rae offered nothing in terms of direct ability to contest the contact with the Abs who were energized by their replacements even when one of those was binned. This is a key when we look at what comes next.

77.14 Horwill (another fresh replacement) attempts to pick and drive and is dominated barely making the gain line and the ruck ball is pressured. 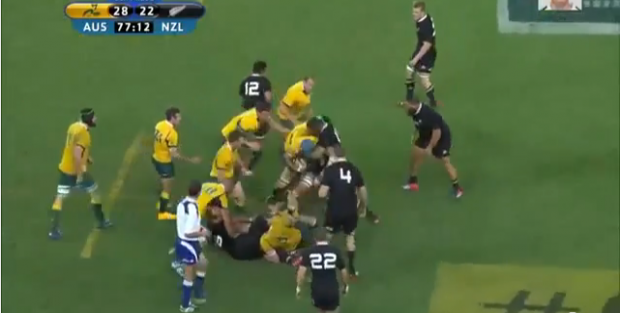 77.20 Fardy attempts to pick and drive and gets driven back and the ABs win the penalty for holding on. The ABs kick for the line. 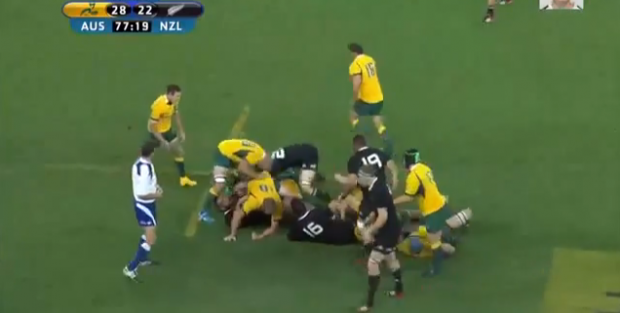 78.06 After winning the lineout, Tomane runs upright into contact (IMO a regular flaw in his game) and is stripped. A poor ABs clearance allows White to regain the ball by diving on it. The first ball from this ruck sees Robinson (another fresh reserve) dominated in contact and driven back to within 1 metre of the Wallaby 22. The 2nd phase from the White turnover see Hodgson take the ball in the 22 and stand static with what I see as the obvious intention to set a ruck in the 22 to allow a tactical exit, with less than 1 and a half minutes to go it is not a bad idea at all. 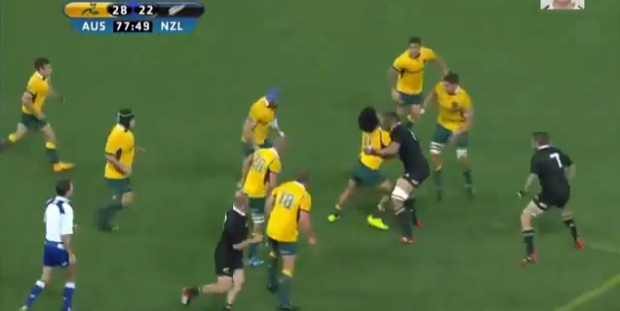 And here is the big key, the subsequent execution of that exit strategy was non- existent. Nobody was in position for White to pass to allow an accurate long kick. Foley was flat for a run or distribution of the ball (obviously not expecting the tactical kick clearance) and Liliafano was acting as the short side pillar. AAC was in his position on the left wing.

So that leaves who to kick, Folau or Tomane. I would actually back myself to win in a kicking dual against the last two. A forward runner was not an option as they were either all on the ground at the last two rucks of just standing watching White. So White took the box kick, and executed it as poorly as his first effort. 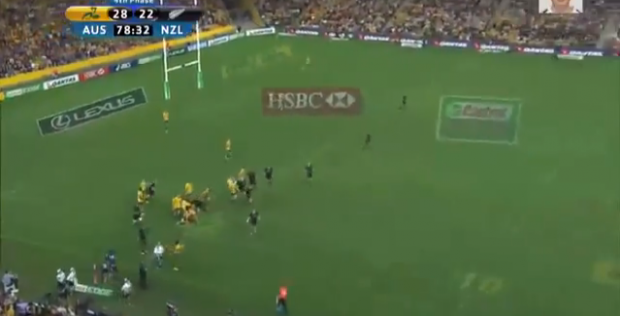 So while White rightly in my view gets pasted for two box kicks which turned over possession and made zero gains, the actual tactic was sound. The communication that that is what they were going to do was non-existent and particularly poor given Lealiifano and White’s Brumby ties. The key reason for the loss was not however the kicking away of possession that lost the game in my opinion.

It is the lack of any discernible contribution from the bench apart from Hodgson. In particular, Horwill comes in for my criticism as he was directly responsible for the penalty awarded directly before Smith’s try. It was a blatant attempt to slow the ball and extremely lazy only 2 metres from the try line. Then he failed to retire quick enough to defend the quick taking of the penalty (even though Smith should have been called back for taking the penalty over 5 metres from the mark) Horwill’s attempted tackle was little more than a wave of his arm.

So for mine, the lack of impact or effectiveness from Robinson, Mann-Rae, Alexander and Horwill is the reason for the loss, just as much as White’s poor execution of a basic kicking skill.