Bledisloe II – Back to our usual programming. 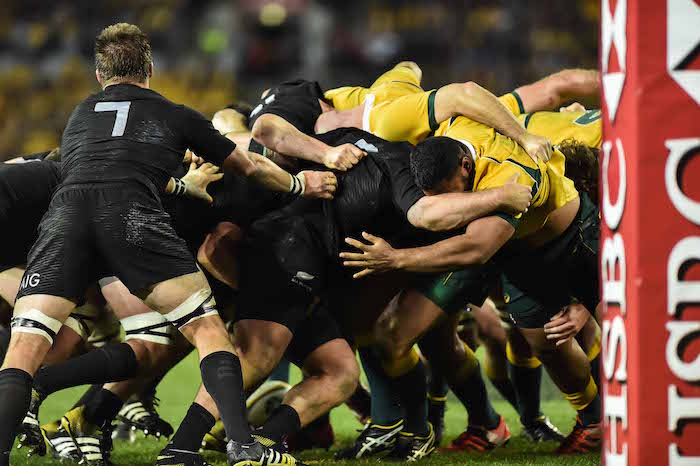 Bledisloe II – Back to our usual programming.

The Wallabies return to a ground where their record is terrible against the opposition who troubles them like no one else. Can Australia beat the odds or will New Zealand continue their Bledisloe dominance.

The first quarter of the game was hard but quiet as two strong teams felt each other out. Australia probably had the better of the play despite the 3-3 score. But right on the 20 minute mark New Zealand turned over Wallaby ball in a tackle and Dan Carter used the quick ball, broke the Australian line and put Dane Coles through to run 40 metres to score. Carter converted and suddenly New Zealand lead 10-3.

And immediately the game went back to a grind. But unlike the first quarter the second favoured New Zealand slightly. The changed dynamics of the Wallaby forward pack are hurting them in the lineout and in ruck and maul. while Palu’s and Skelton’s power game has hardly been seen. Adding to the Wallabies woes is the trouble Scott Sio was having in the scrum. Sio side collapsed leading to two penalties to New Zealand.

Both Palu and Skelton were replaced by Mumm and Pocock at half time. The need for more effectiveness at the lineout and the ruck and maul had been recognised.

New Zealand stil look the better side and a poor kick by Matt Toomua gave them another chance to score. and Aaron Smith ended up running for the line when Quade Cooper hang a desperate arm out and took him head high. Nigel Owen had no choice but to award a penalty try and sin bin Cooper.

Moments later another terrible Toomua kick landed into the arms of the New Zealand backline who hacked it down field where they recovered the ball and moved it to the left to put Ma’a Nonu away for the try.

New Zealand  were building momentum and moments later Conrad smith scored their forth try and the third in ten minutes. The Wallabies self destructed with poor kicking, dropped ball and forward passes heaping unneeded pressure on them. with no disrespect to Nic Whites efforts I can’t help thinking how good it would be to bring Nick Phipps on to speed up the game a little.

New Zealand heap on the misery with a switch play to Nonu who brushes off White to score. New Zealand, with the game won, were now running from everywhere. Brimming with confidence while the Australian’s game had disintegrated

It would be easy to pick Cooper’s high tackle a sin binning as the turning point but the game changed 25 minutes earlier when Coles scored his try. From that moment on the All Blacks were in the ascendency. Don’t get me wrong Cooper’s sin binning was devastating to the wallabies game but it wasn’t the turning point.

SHIT! forgot to look for a MOTM again. I’m going to go with Aaron Smith who was everywhere as usual. You could easily pick any of the Kiwi backrowers as well. Or the Kiwi centres. Or…

Skelton and Palu’s card would have been mark down a little. The Wallabies search for a halves combination continues but it looks like we’ll just have to pick someone and stick with them. As for someone who stood up? James Horwill. Adam Ashley-Cooper. Israel Folau. And not many more.