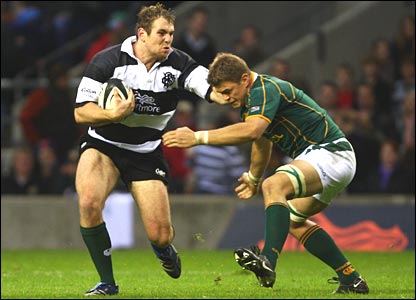 So many times an all star Barbarian team has disappointed through poor defence and lateral attack, but not today. Almost to a man the Barbars played their hearts out and showed this Springbok team to be out of ideas. The first half was a cracker, the Corinthians scoring two great tries, and probably spilling another three, going in at the break 15-5 up.

The first try came from classic counter-attack; the Boks were in possession 10 metres out when Habana switched pass to no-one. Ma’a Nonu, a handful all day, toed the ball almost to the half way, picked it up from around his bootlaces at pace with two men on him and offloaded to Giteau who found Conrad Smith with a cut out pass. Smith couldn’t outpace Stein but held up the ball long enough for the swarming BarBar backup to arrive and Giteau, out of 3 others lobbed over the line.

The second was a Martyn Williams classic: he looks and runs like a pudding, but manages to pull freakish feats of skill from no-where. Seeing nothing on while attacking from the Bok 22, he chipped the defensive line for the Italian prop Pucciarello (who had a cracker) to regather, draw 3 defenders and then offload back to Williams who scooted to the line. By comparison, the boks could only manage a dot over try in the corner when the ball popped out of a ruck.

Early in the second half the game was meaningfully ended when Stein hoofed the ball downfield for the human steam train and Fiji winger Neivua to motor his way back to the half way line. From the recycle, Elsom put himself in through a gap in the mid-field, and then ran a Campo-esque diagonal to the try-line with 3 springboks hanging off him until it was too late. Kid Dynamite slotted the conversion from the side-line.

This signaled time for the heavens to open and the South Africans to lose direction. Stein tried and failed with long range drop goals at 22-5 down and even through they camped on the Barbars 5 metre line for 30 minutes, the world champions came away with nothing, such was the resolute defence of the scratch team they faced.

Despite the South Africans killing the second half, from a rugby lovers perspective, the first half was worth the price of admission alone. The Barbars ran with purpose and used their hard runners like Nonu, Rokocoko and Neivua to great effect to straighten play, with Jason Robinson reminding us of his unique ability to beat men in his last international game. Considering they had only a week to gel, their linking play was outstanding.

From an Aussie rugby supporters viewpoint, Giteau and Elsom were excellent, popping up at important times all over the field. 17 out of the 22 points ain’t bad! Giteau’s handling and distribution is of a different order and Elsom is starting to look like an established world 15 back-rower, outshining Jerry Collins. I also liked the look of Ma’afu at 3 who was imposing around the ruck.

Ultimately this game probably doesn’t say that much about the Springboks, they had only 5 players from the final and were missing their leader Smit. What it does say though is that there is still a place for the ideals of the Barbarians, even in this professional era where Sheridan’s club can ban him from playing for them (to then give him the weekend off) and world cups get ground out through penalties and drop goals. 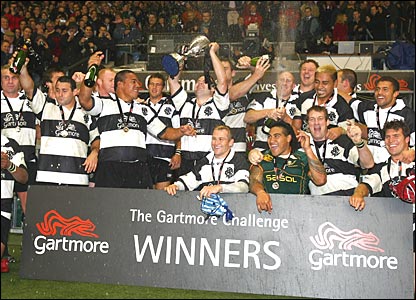