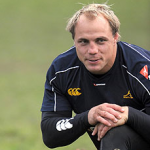 Below are the teams for the Wales vs Wallabies match on Saturday in Cardiff. I like the look of the Aussie team because it says to me that Antipodeans is serious about a Euro clean sweep. The tell tale sign being the tight 5, where the experimenting has gone out the window and we see the first choice scrum back with Chishholm and Robinson to shore up the Loose head side.

He’s put Waugh in, perhaps as a last chance for the Tahs captain, but I don’t think they’ll lose too much in pace with him against the welsh openside warhorse Williams. In fact this game should suit Waugh if anything, and a last 30 from Smith could well be a good cameo.

Brown comes in for Palu who’s bashed his shoulder. Big Cliffy is a hard man to replace these days, he was awesome in Paris.

At last Wallaby supporter voices have been heard and AAC moves out of fullback for Shmoo, who while not a polished 15, made a better fist of it. AAC is bracketed on the bench with Lote, not sure what the bracketing is about though, neither are reported as injured.

Battle of the Hemispheres
Suggestion box