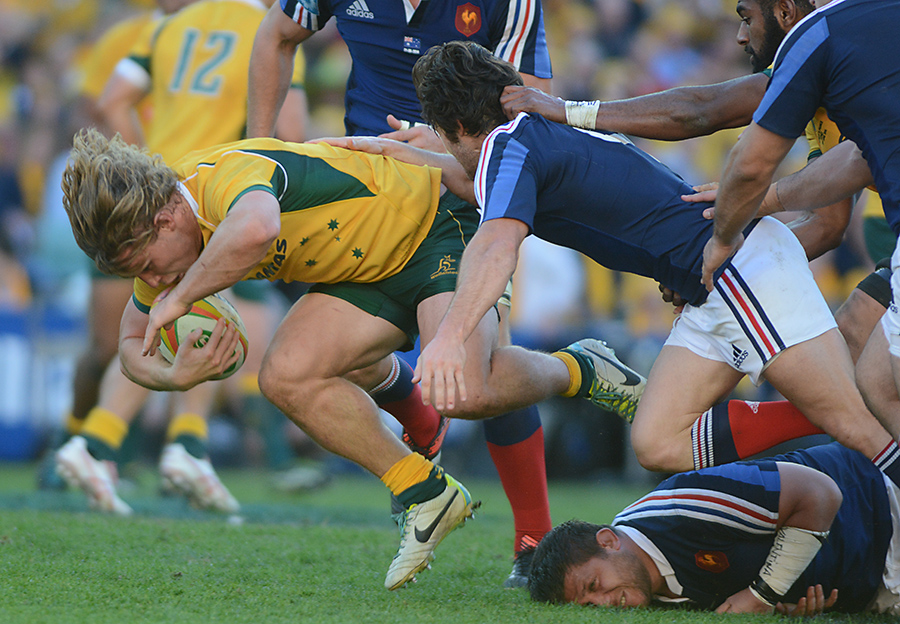 A far more open game of rugby on a delightful Sydney afternoon proved to be seventh heaven for the Wallabies, as they extended their undefeated home streak over the French to eleven games.

The more significant ‘streak’ is that it is now seven wins in a row for Ewen’s Wallabies providing them an almost perfect lead in to the upcoming Bledisloe Cup and Rugby Championship battles to come.

This 39-13 defeat of France was more Brisbane than Melbourne and matched strong forward work with some magic out wide – a formula sure to bring the crowds back as well as, hopefully, some silverware.

Player ratings for this game are below. Be sure to let us know below what you think, not that you have ever needed an invitation.

Must be close to the Wallaby Player of the Series, given his consistency. We know a prop shouldn’t be rated on his loose play alone, but Slipper’s contribution around the field highlight his value to the team whilst he continues to contribute in tight as well.  7

Produced his best game in the Green and Gold for sometime, full of bullocking runs, strong defense and plenty of aggressiveness at the ruck. Scrums have been messy all season but TPN displayed some tremendous strength to marshal his pack. 8

Sekope’s biggest challenge has been producing back to back high quality test performances. Well he has done it now, following on from his G&GR MOM performance last week, and was part of a Aussie front row that is really starting to make it’s mark on the test stage. Next step? Doing the same in the Rugby Championship.  7

Let’s consider what Skelton was brought in to do. We weren’t looking for the 80 minute work horse game that Sam

Carter produced in the first test. It was to make an impact on the opposition defensive line after a somewhat static attacking effort by the Wallabies last week. When marked on that, he was outstanding. Strength got him the first try of the match and the French fear of it, plus a handy dash of skill, got the Wallabies another with his off-load to Izzy. Possibly the best Wallaby forward debut since Willie O in 1990? 8

Another very strong game from Simmons as he controlled the line out well and once again proved a defensive asset for his team. Mixed up his line-out calls astutely, and tested himself on occasions when double teamed by the French. Developing into the mail man of the Aussie line-out – always delivering. 7

The end of a disappointing series for Fardy, hot on the heels of securing the Green & Gold Rugby Player of the Season in 2013. We know it’s a prestigious award but we hope it  is not too much of a burden to live with, it’s just we sure miss the Fardy of last year. Not the dominant presence at the ruck he was in ’13, and is making uncharacteristic mistakes too often.  5

Another all action game from, Captain Fantastic, Michael Hooper.  Topped the tackle count for the Wallabies and was again a weapon in attack. Whereas Steve Larkham used to ‘ghost’ through the defensive line, Hooper ‘demons’ his way through, using his power and acceleration. Rewarded with a deserved try. 8

Have we seen a finer performance by big Cliff in the Wallaby jersey? I can’t recall one. He was my Player of the Match, in front of Hooper and TPN, for his impact from the very beginning. Always dangerous in attack, his presence was really felt at the ruck and maul as well. We NEED to see this form against the All Blacks to bring that big cup back from across the dutch. 9 (G&GR MOM)

A different game from last week, which seemed to more suit his style, White struggled to find his groove early with some inaccurate passing, and of course kicking from the first touch of the day (a handy one, it must be said). Was able to demonstrate his skills as the game progressed, controlling the attack around the ruck. 6

This combination seems to be struggling and I can’t pinpoint if it’s inside with the scrummie our outside with the in-centre. Regardless Foley is not controlling his backline and in this game they again lacked the direction needed. Some dodgy hands and poor passing was mixed with some flashes of class and a great day with the boot. Can he win us a Bledisloe though? Not in this form it would seem. 5

This was not the Badger’s day. Neither winger saw much ball for most of the first half and when it got to Cummins, his space was limited or the pass from inside was poor. Highlight was a gutsy as buggery one armed tackle when the other was injured. Can’t deny his effort. 6

A victim perhaps of his inside man, and hasn’t formed the same combo with Foley that he did with Quade Cooper last year. Crabbed a bit in attack and was largely non-effective. Strong in defense still and will be critical to our further success this year. 6

It was great to see him throw himself into the game early on with some strong runs in tight. Made every effort to get his hands on the ball early and get some key metres for the Wallabies. The effort seemed to fade and he remained in his 13 channel, still looked dangerous ball in hand, but was well covered by the French. 7

Suffered from a lack of ball, as with Cummins, the result of which were barely significant. Had a couple of opportunities to break away, but the Wallabies are lacking that out and out speedster on the flank to strongly counter from deep. Looked much better when moved to outside centre. 6

As dangerous as always and added two more tries to his test tally giving him 13 from 18 tests (more than Digby Ioane, Peter Grigg, Cyril Towers and Col Windon). Some loose disposals provided frustration for his outside men and was the difference between his performance here and in Brisbane, as he seemed to take a couple of steps too many before unloading. Still bloody unbelievable though. 8

Only got on for the last ten minutes or so and made no real impact in this time. No rating

Was on for about half an hour having replaced Slipper. Scrummed strongly and threw his considerable weight around. Good impact 6

Played about 20  minutes after coming on for Kepu. Made one strong run but couldn’t be seen much other than that. 5

Provided excellent impact from the bench and perhaps has found his role to play moving forward to the Rugby Championship. Threw himself into everything running strongly, clearing the ruck, and making his presence felt. 7

Played just under 20 minutes and was like Horwill in workload, without quite the same impact, but kept the momentum of the game going by doing plenty of work across the pitch. 6

Played the last quarter efficiently enough. Was alert enough to back himself for a quick tap and was rewarded with a try late in the game. 6

Came on for Toomua and the Tah combo with Foley was evident in the try the two set up for their skipper. Provided a bit of zip zip as we hoped as the setting was made for him. This seems to be his role, being given somewhat of a free reign from the bench. 6

Only got on for the last ten minutes or so and made no real impact in this time. No rating