Tonight is the first proper test for Dave Rennie’s Wallabies. If his black period is to be successful, the Wallabies need to start knocking off teams ranked higher than them. Even teams missing most of their top ranked players. Even teams who’ve been in lockdown for weeks.

The wallabies started a little skittishly and invited the French into their 22 with an unforgivable scrum stuff up. The ball squirted out the side straight into french hands and only a couple of phases later Le Bleu were in through number 11 Gabin Villiere. 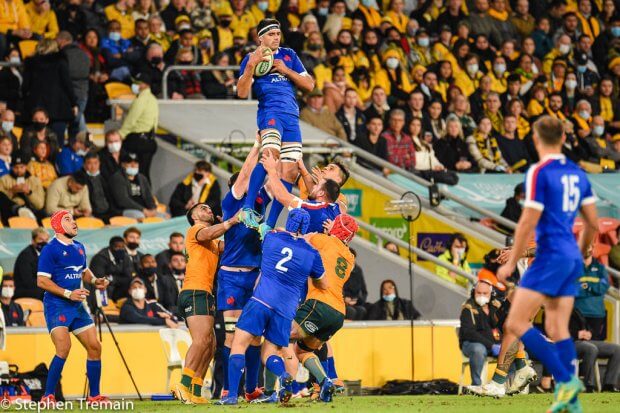 The Wallabies looked to have hit back immediately, but were pulled back for a forward pass. Outside Centre Hunter Paisami’s run in the disallowed try was a highlight of the game.

Once again, the Wallabies made errors and invited France into their half. France made no mistakes, and Gabin Villiere gleefully accepted the inside ball and ran in his second try untouched.

Finally, Australia calmed down a little and applied some pressure to the French line. Brandon Paenga-Amosa crossed at the back of a maul, as all good hooker tries should be. That was it for points for the first half. France lead 15-7 at the break. 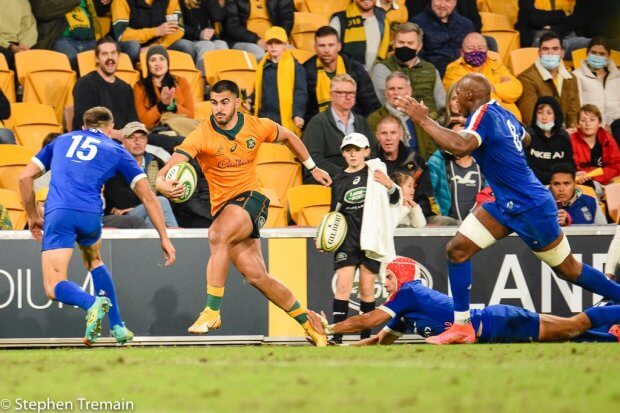 The first 20 minutes of the second half was a bit of an arm wrestle. Australia had the only chance to score a try, but they were crueled by the bounce of the ball. There were penalty shots though and with about 18 minutes to go France lead 21-13.

Australia scored through Michael Hooper with ten minutes to go. Tate McDermott had made an instant difference around the ruckwith his speed and running game. He put poth Valentini and Wilson in to mini gaps before Hooper backed over for a try. It was a one point game with minutes to go. France lead 21-20.

In the 76 minute the Wallabies played smart rugby and went for a field goal. Unfortunately, it sprayed off to the right.

Oh, wow! Here we go. Australia were attacking with 30 seconds to go when France won a penalty for not releasing. They kicked for the lineout and Australia pressured. France threw a couple of panicked passes trying to get a kick for touch and Tate McDermott pounced on one of the passes and Australia hammered away at the line for what seemed like hours.

France gave away penalties in the turmoil, how could they not. Australia slowly worked towards the posts and Noah Lolesio took a shot at field goal, but it was charged down. The ref went back for a penalty right in front of goal and Lolesio had no problem slotting it. Australia in front for the first time in the game win 23-21! 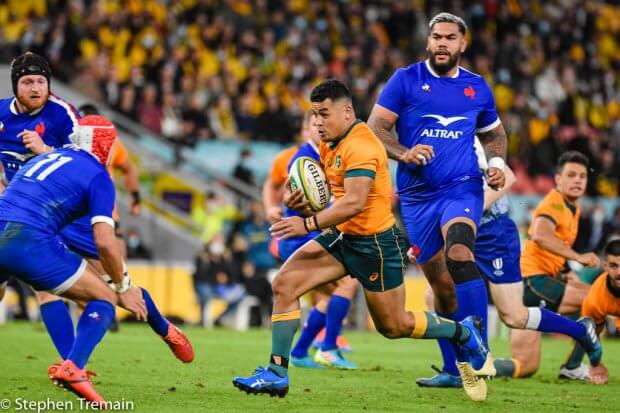 Tate McDermott subbing on for Jake Gordon. Not a doubt in my mind that this changed the game.

Three players come to mind. Koroibete, Paisami, and Wilson. Of the three I’m giving Koroibete the gong, but Wilson was bloody close.

I’ve already mentioned Wilson, McDermott and Paisami. To’omua did himself no favours. Valetini lost too much ball in contact. Tupou and Bell made a difference when they came on. Lukhan Salakaia-Loto did his job with aplomb.