Yes, you read right. The Australian schoolboys beat their New Zealand counterparts 11-15 in New Plymouth. It’s the first time the nippers have ever beaten the Kiwis in New Zealand since the fixtures started in 1978.

But by stuffing them on the bounce (in Sydney last year) this is also the first two wins in a row and only the 7th win out of 26 matches. So with this in mind it’s hard not to think that there’s obviously some pretty decent talent coming through. Good news for the struggling S14 sides and vital if there’s going to be a 5th team some time soon.

With the breakdown playing an ever more determinant factor in deciding games, it’s also good have a back row rising star in the form of Eddie Quirk, who won the Bronze Boot Award (player of the series). Other winners in the past include Wallabies George Smith and Phil Waugh, and All Blacks Jerry Collins and Carl Hayman. 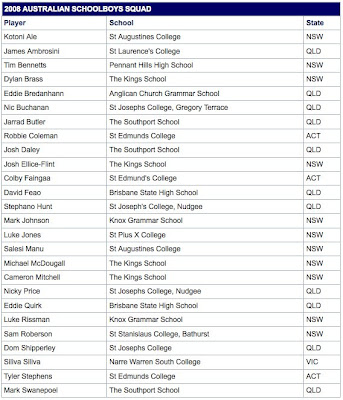