The BMW Australia Under 20s had a patchy 43-20 win over Samoa Under 20s in their first game of the Oceania U20s Championship which started at Bond University yesterday.

In rainy and windy conditions the young Aussies commanded the set pieces and scored seven tries to two. 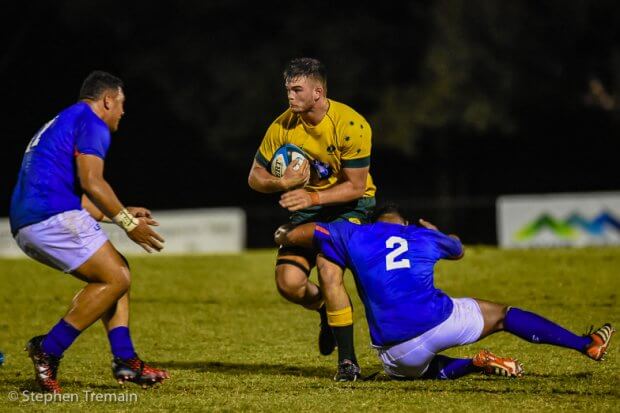 After a dominant scrum winger James Ram was in at the corner and scrummie Ryan Lonergan kicked an excellent conversion from wide out across the wind.

But Samoa crossed after choosing to take a scrum option and getting the ball out just in time, then wrong-footing a defender, who slipped. They also converted majestically from near touch to make the score 7-7.

The Aussies struck back immediately when they picked up loose ball and winger Dylan Riley charged ahead before backhanding the ball to Len Ikatau for five points.

Riley would have been pleased to redress the slip he made earlier and he continued to play well, with a touch of Cameron Shepherd in his play.

Around the end of the first quarter of the game Samoa kicked a penalty then Lonergan sniped from the scrum to dot down. With conversions Australia led 19-10. 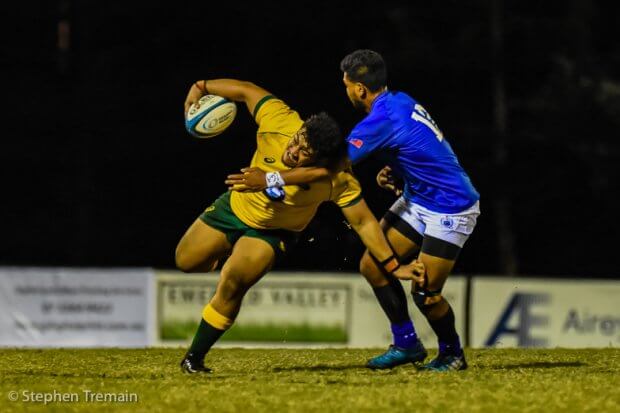 The second quarter wandered for the Aussies. In the windy conditions they were were spaced too wide which meant longer passes, the ball not being on target, and runners losing the cadence of their stride.

There was no more scoring in the opening session except just at the end when flanker Angus Scott-Young took a run down the tram tracks in a set move to score.

The Aussies hogged possession in the first half and when the visitors had it there was too much dirty ball for them, often caused by shoddy scrums and lineouts, but otherwise too. 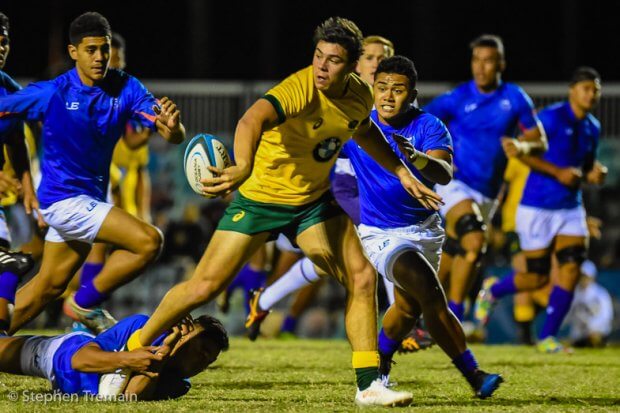 With the wind at their backs the young Aussies should have played most of the half down the other end and scored plenty. But again, they let time go by as they wandered, and the coming and going of replacements did not help.

They missed a chance early when a pass got dropped cold, but after a perfectly-placed penalty kick to the corner THP Harry Johnson-Holmes scored from a tasty lineout drive.

Then after Samoa drilled a penalty goal the Aus Juniors recovered the lucky bouncing restart kick and Hewat scored. Aussies 38-13, ten minutes into the half. 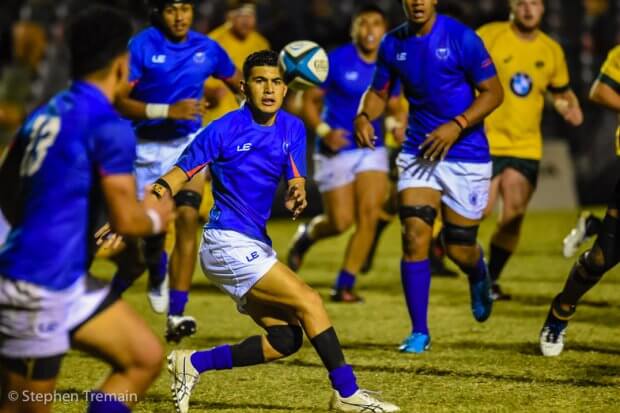 Gold Coast local Ethan Lolesio made his debut for Samoa

Both sides lost the rhythm they had from time to time when subs came on. Scoring stopped for a while, but at 65 minutes Aussie hooker Efi Ma’afu dotted down when the visitors’ scrum ball went amiss.

The best try of the game was just before the siren after Samoa launched an ensemble try from well in their own half. It finished with a perfect kick and chase for an individual try that everybody applauded. 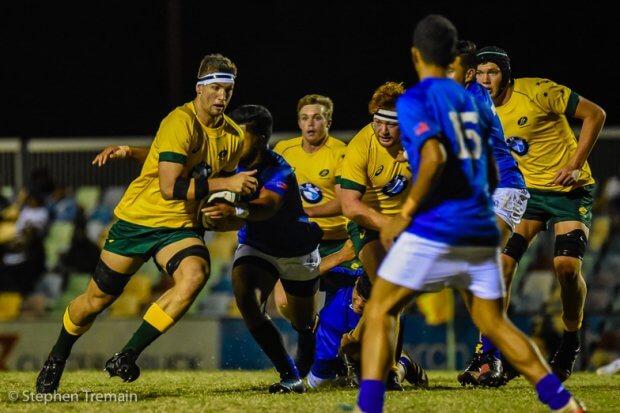 Ryan McCauley runs on to a Harry Johnson-Holmes offload

It was a scratchy performance to what the young Kiwis put on against Fiji, but they had some good moments. Like last year it appears that they will have a strong scrum at the Worlds.

The strength was in their front row and with Force Super Rugby THP Shambeckler Vui to come into the side and Johnson Holmes able to play with the 1 or 3 jersey, the Aussies should prosper at scrummaging, lifting and power running from that unit.

The locks were nifty in the lineouts, with taking and spoiling, and the backrow was a fine crew, but other contenders for the semi-finals in Georgia will have two power traffic runners in their back five and often, three. 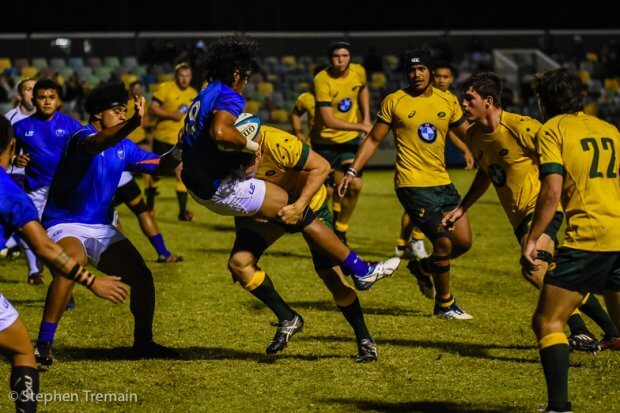 Lachlan Swinton made an impact in his brief appearance

I didn’t see any in the Aussie team today—young fellows with big engines, skill, and going well around the corners, but not running over big people.

There weren’t too many stand-outs in the backs which is the norm for recent years, but we will get a better idea after the next two games when they will be more in the groove. And if we are thinking about the Worlds we shouldn’t forget that there are more players to come into the mix from Super Rugby and Sevens.

The player that surprised me was scrumhalf Ryan Lonergan – a schoolie from last year. He was at the rucks early, passed well on both sides and his delivery was lickety-split. He has a big future methinks.

Seven tries to two was not bad in contrary conditions but the home team performance was much the same as in other games against Samoa in previous Oceania U20 Championships. 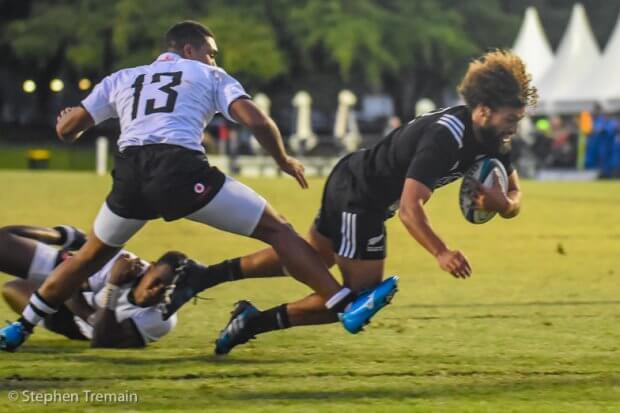 The Kiwis were not perfect against Fiji in the curtain raiser to the Aussie game, but their structures were more consistent—and because their accuracy was better they played with more ambition.

Offloading at speed was a skill that none of the other three teams could match on the day. 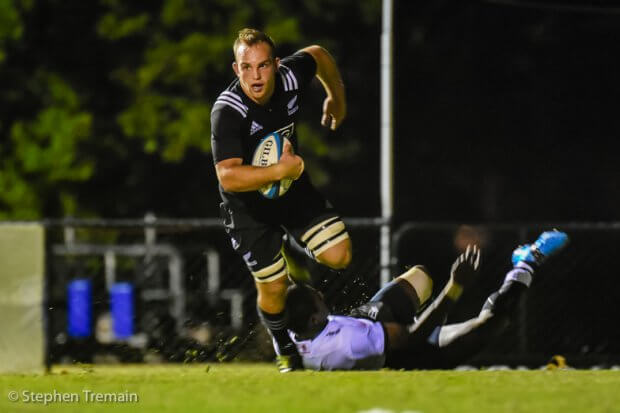 Photos from Stephen Tremain – thank you

Apologies for not naming the Samoan players but I didn’t have a team list. 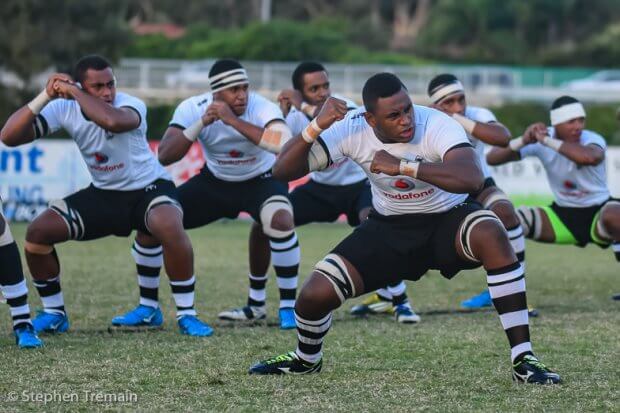