All tied up in Durban 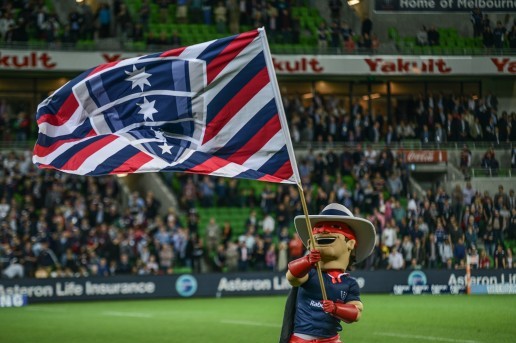 All tied up in Durban

The Sharks and Rebels have played out a 9-all draw in Durban.

In a fairly dull match, underpinned with poor execution and handling, the Rebels managed to hold out their highly fancied opponent.  The Rebels held the lead for most of the match, lost it briefly, then won it back with a kick after the siren.   The Sharks will rue the lost opportunity to beat a under-strength team.

Despite some good playing conditions, both teams wasted possession with some poor handling and execution.  The Rebels continued their recent love of cheese, with Nic Stirzakrer earning 10min in the bin for a deliberate knockdown.  Not the best start of el Capitano.

The Sharks didn’t capitalise on the extra man, gifting the Rebels a penalty for a ruck infringement.  Reece Hodge made no mistake with the kick, giving the Rebels a 3 – 0 lead.

From the restart, the Sharks went on the attack, launching a number of raids into Rebels territory.  All their good work was undone with poor handling and ball security, highlighted by two steals from Prop (yes, a Prop) Tyrell Lomax.

The Sharks’ best chance came after a successful 5 metre lineout.  Beast Mtawarira found himself with the ball, charging for the line.  It was only through the good work of debutant Will Miller that he wasn’t able to score.

This is where things became interesting.  Despite earning a penalty, Andre Esterhuizen was pinged for a lifting tackle on Sefa Naivalu.  As the lift was above the vertical, and Sefa landed on his head, Esterhuizen was shown a Red Card.  Despite the uproar from the “commentary” team, it was a dangerous tackle, and the ref made the right call.

After a good scrum, the Sharks earned a penalty in front.  Curwin Bosch made no mistake, levelling the scores at 3 – all.

A few minutes later, the Rebels earned a penalty for another Shark infringement at the ruck.  Despite the angle, Reece Hodge made no mistake, giving the Rebels a 6 -3 lead.

Just before oranges, Sefa Naivalu made a late burst on the wing and almost a scored the try.  Sadly, he was dragged into touch.  The scores remained at 6 – 3 Rebels att the break.

The second half started with a Rebels raid into Shark territory, only to see a turnover in sight of the line.  The Sharks regathered the ball and kicked into Rebels territory, and forced enough pressure to earn a scrum.

A strong Sharks Scrum earned them a penalty in good kicking range.  Curwin Bosch missed an easy kick, leaving the score at 6 – 3 Rebels.

Curwin Bosch – not really his night with the boot

The Sharks tried mauling of a number of 5-metre lineouts.  The Rebels held on valiantly, but they collapsed one too many times.  James Hanson, only on the field for a few minutes, earned a yellow for collapsing.

At the third lineout and driving maul attempt, and the Sharks looked to have scored.  However, replacement lock Ruan Botha was pinged for wrapping his arms around the throat of  Culum Retallick.

At this point, the Sharks started to take the ascendency.  After winning a lineout deep in their territory, the Rebels botched the ruck defence, gifting the Sharks a kickable penalty.  Curwin Bosch made no mistake, and the scores were 6 all.

With scores all locked up, all Rebels fans hoped we’d maintain discipline.  Somehow the message didn’t get to el Capitano Stirzaker; another cynical knockdown, another yellow, which turned into a red.  So, 10 minutes to go, 14 players apiece.  All set for a tight finish.

The Sharks upped the attacking pressure, with  Jacobus Van Wyk almost scored out wide.   However, a wonderful tackle from Mick Snowden saved a certain try.  The Sharks coughed up a certain 3 pointer when replacement half  Michael Claassens decided to run for the tryline.  They spun the ball wide, but they could not gather out wide, and the ball went into touch.

The Rebels had another chance to score a try, wth a linebreak and 80-meter run from Sefa Naivalu.  Again, great defence from Curwin Bosh prevented the try.  Somehow, he managed to earn a timely penalty for the Sharks.

With three minutes to go, the Sharks finally got heir chance, with a penalty right out in front.  Curwin pointed to the sticks, composed himself, and kicked the Sharks into the lead.  Scores 9 – 6 Sharks.

In the final minutes, the Rebels had one final chance with a line out in Sharks territory.  Somehow, the Sharks stole the ball, and they began winding down the clock with one-man hitups.  Will Miller had other ideas; with his fourth pilfer of the match, he earned the Rebels a Penalty in kicking distance.  Through the consistent booing of the crowd, Reece’s kick was successful.

Reece Hodge – kicks the penalty right on the siren, ties everything up.

Scores 9-all after 80 minutes.

The Red card to Andre Esterhuizen gave the Rebels an extra man for 60 minutes.  It was a stupid act by Andre and almost cost his team the match.  Conversely, the red card by Nic Stirzaker almost cost the Rebels the match.

On debut, Will Miller had an outstanding match.  His four pilfers, including the one to earn the last Rebels penalty, shows this kid has a bright future at the elite level.

Reece Hodge had a reasonable game, with some good attacking runs and three penalties (in\cluding the 80 min pressure kick).  Sefa Naivalu was handy, with some great defence and two great runs out wide.