The final trial prior to the selection of two NSW Schools’ teams to compete in the Australian Schools Rugby Union Championships was held at Curagul Oval yesterday.

The Teams from the CAS, GPS, ISA, AICES and CCC school associations strutted their stuff in front of NSW selectors, and also national selectors who would be choosing a Combined States side.

Here are the games – in reverse order.

The main game, in the late afternoon, was played in freezing conditions and the teams were locked together in a tight contest until the last quarter.

The superior fitness and longer hours of training of the GPS lads told; but my word: it took a while.

CHS were the best team of the day playing with the wind behind them – especially flyhalf Hayman and fullback Masima. A good kick through ended up with Masima catching a high pass to score with nobody near him.

Meantime the GPS players passed the ball too-long in the wind and suffered the consequences; and when they got it right the CHS defence was too good – or GPS knocked the ball forward on the try line.

But ten minutes before the break they parked near the CHS goal line and 8 Fenn went on one of his charges and scored. 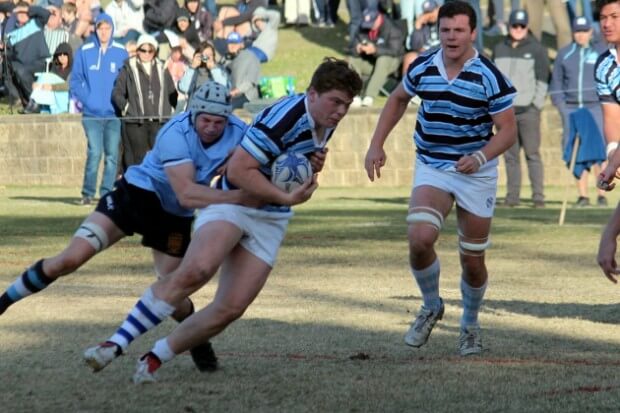 Michael Fenn near the line

That was close and so was the start of next session. CHS threatened briefly but most of the play was in their half.

CHS had some more raids with 12 Tuala crash-balling and Masima and 11 Mafi causing alarm, but GPS finally had a move pay off. Winger Taukamo belted a brave tackler and dished the ball to fullback Osborne who saw a yellow brick road to the goal line and scored. GPS 14-5.

After the restart Taukamo got a pass from centre Orpen and took the same track that Osborne did.

Finally the ball went from the right of the field to the left and12 Wilkinson touched down. 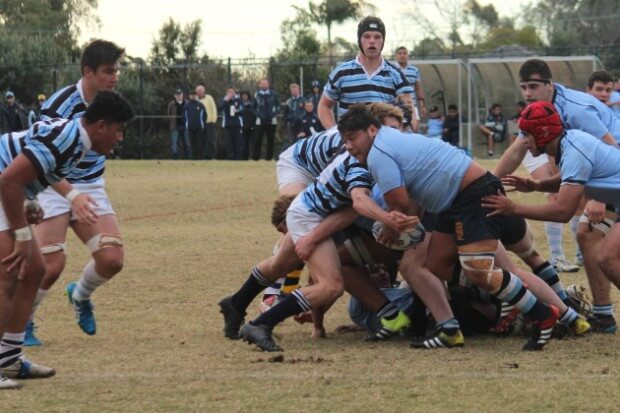 Jacob Bristowe – one of best for CHS

Hooker Bristowe and THP Tita were in the faces of GPS tight attackers all the time. Fullback Masima had a cracking game and one wondered how he would play in a GPS team. 12 Tuala always needed a couple of tacklers to attend to him, and scrummie Fanolua passed as well as anybody did in the wind, on the day. 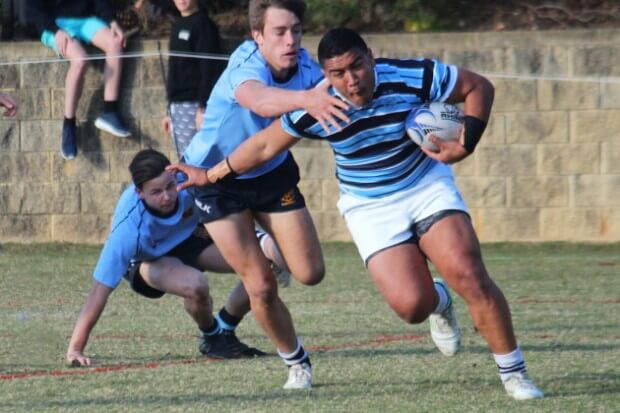 Tyron Taukamo – best game for a while

Hooker Jaevons-Fellows played well in a dummy-half kind of way and Rorke did enough to be picked in the highest grade NSW team but wasn’t. Winger Taukamo had his best game for a while.

Man of the match.

Opeti Helu had a damaging second half in the tight and enjoyed the open spaces also.

The CHS selector’s decided to find the biggest, meanest looking rugby beasts across the CHS and galvanise them into a cohort that could beat the silvertails into submission. Would their “go big” strategy work?

In contrast the GPS II’s pack looked like they were walking into a war zone armed with sticks of wet celery and cap guns.

But looks can be deceiving and the sneaky GPS selectors had identified a squad of assassins, skilled in hand to hand combat who’d all been stress tested in the cauldron of GPS Opens competition. GPS’s contrasting selections strategy appeared to be based on embracing the Dalai Lama’s philosophy of “If you think you are too small to make a difference, try sleeping with a mosquito”. 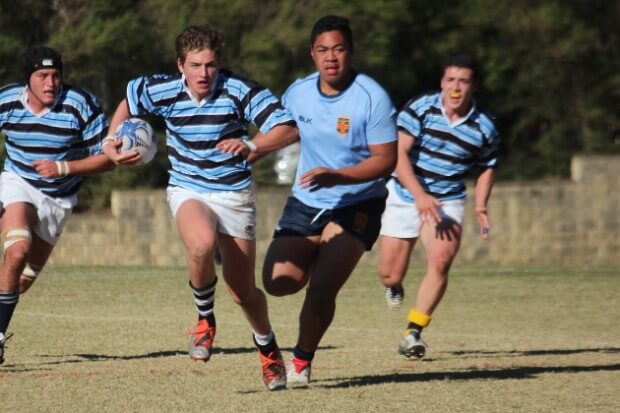 Two minutes in and CHS threw every kitchen appliance at the GPS piggies who held firm and started to dominate in the set piece and general play. With the opening volleys between the pigs absorbed it was time for the hairdressers to launch raids into their respective enemy territories.

In the ensuing exchanges GPS took enemy fire and lost centre Millar to a shoulder injury. His replacement Rixon set to work with numerous sniper attacks down the sidelines, ducking weaving and repelling all attempts to shoot him down. 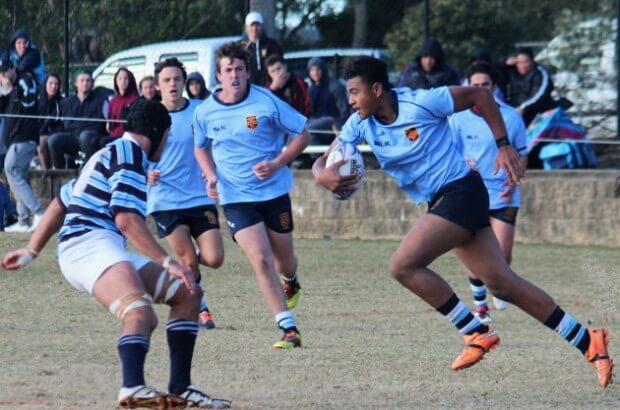 Haumole Olakauatu on the attack

This was to be a theme throughout the remainder of the game with GPS winning plenty ball of set piece ball, punishing the CHS mistakes and providing the GPS Salsa Dancers plenty of opportunities to showcase their latest dance moves.

CHS spent the game rotating their front row every ten minutes which had the twofold benefit of giving them time in front of the selectors as well as time to refuel by grazing on unsuspecting spectators who wandered past their bench. 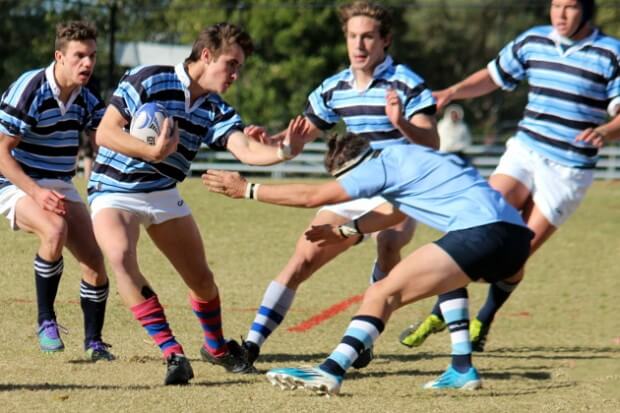 Fullback Rixon and lock Silk had excellent games. Winger Day was in great form with the boot despite the wind. Reserve Lawson played well when he came on.

Flyhalf Carberry was a standout, scrummie Lewis was handy, and locks Kemp and Gifford had top games. Reserve Poaru was notable with ball ball in hand.

ISA were disciplined and patient resulting in a try through the forwards to ISA No. 7 Hingano, but after CAS finally got some possession they worked the ball downfield and 13 Armstrong scored after a grubber kick through. ISA responded with a second try by Hingano. ISA 10 – CAS 7.

CAS punched back with another try and inexplicably the ISA flyhalf chose to kick the ball into touch after ISA were advancing into CAS territory on the siren.

CAS did not seem to have enough points with a strong wind behind them but they were in the lead. 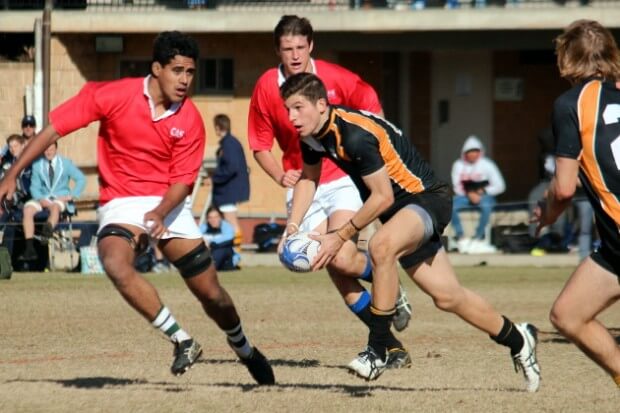 ISA snared a penalty from the kickoff and the forwards put together many error-free phases which made metres and ultimately led to a try by hooker Ongosia.

CAS weren’t going to lie down and they replied immediately: after some more slick backline passing Longville scored and Woodcock converted. Then captain Basson made a typical long, mid-field run, passed to winger Mohi who kicked ahead for Armstrong to score his double. CAS led 25-10 and seemed to play better against the wind than with it.

ISA struck back with a dominant try by their No. 8 Willy Manu, which was converted. They were fighting back and parking on the CAS line – and whilst CAS got good turnover ball, they kept handing it back with penalties, handling errors and lack of ball security. 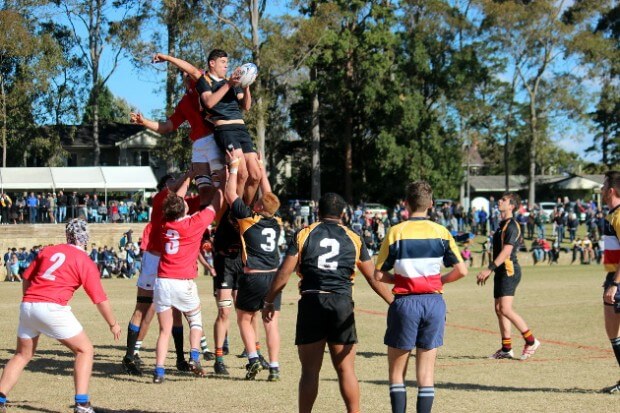 ISA took their chances and passing to their winger they scooted past the CAS outside backs for the lurking tighthead prop Abra to score in the corner. Big bopper hooker Ongosia converted from touch.

Basson responded with a dominant run for CAS and scrummie Jordan scooted smartly around from the back of a scrum to score. Woodcock converted.

CAS had skipped out to lead 38-27 and looked a good chance to win.

ISA had other ideas and returned serve as in a tennis match: they exploited weak defence down the CAS wing for winger Veitch to score and Ongosia to kick another wide conversion. Could ISA do it? 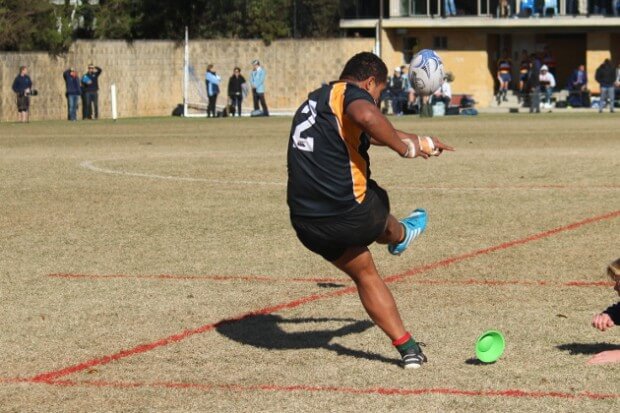 ISA somehow turned the ball over after a Mohi run for CAS and marched 70 metres downfield. With defenders attracted they flicked ball to their winger Veitch to score his second. Time was up and they didn’t bother taking the conversion attempt. They had scored seven tries to six.

The sun came out but the wind picked up as the teams lined up at 11.10am.

CAS II made a good start to the game. After a clever line out play scrummie Bosch scooted for 15 metres before offloading to hooker Matt Coghill, who scored in the first five minutes with a damaging run. They also had a dominant scrum.

No. 8 Betham and 12 Harrison made good yards for CCC but the attack and defence of their back line was too hesitant to be effective. Eventually their forwards took control which helped 6 Wilson to score a bullocking try from broken play to tie the game 5-5..

Mazarki followed up with a brilliant winger’s try for CAS.

Because of the windy conditions none of the three tries had been converted.

After the break the CAS backs picked up their game and players such as scrummie Bosch, fullback Stocks and inside centre Fuller made inroads most times the ran with the ball. The pressure on the CCC defence told and flyhalf Searle barged over from a set piece. CAS II 17-5.

CCC had plenty of possession now and defended well, whereas CAS made handling errors. CCC then created a scorching back line move from which lock Ha’angana smashed over for a try. This was also unconverted!

CAS lost a couple of lineouts but otherwise continued their their forward dominance, particularly in the scrum, to the end. This gave their backs a solid foundation.

There was an excellent display of running rugby from ISA II and AICES in the first match of the day, though ISA dominated. They established a solid platform upfront and their back line displayed slick hands and straight running.

Unfortunately the AICES boys struggled not being able to get their defensive structures set in time. Consequently the ISA backs were free to run through and around them and score several tries.

On offence both teams displayed a relatively high level of ball skills with few handling errors .Although the intensity of the hits and the speed of the game may not have compared well with that of later matches, it was a free-flowing spectacle, helped by the services of a sympathetic referee.

ISA II used their emphatic majority of possession to good effect and defeated a never-give-up AICES side 54-3.

Although all players named will get a starting game during the week, the first 15 players listed in NSW Is are considered by the selectors to be the best in their position in the state.  The next 15 best players are listed at the top of the NSW IIs list.

By doing this the Australian Schools’ selectors will get to see the best 30 NSW players starting games on a regular basis.  Otherwise some of them will spend too much time on the bench.