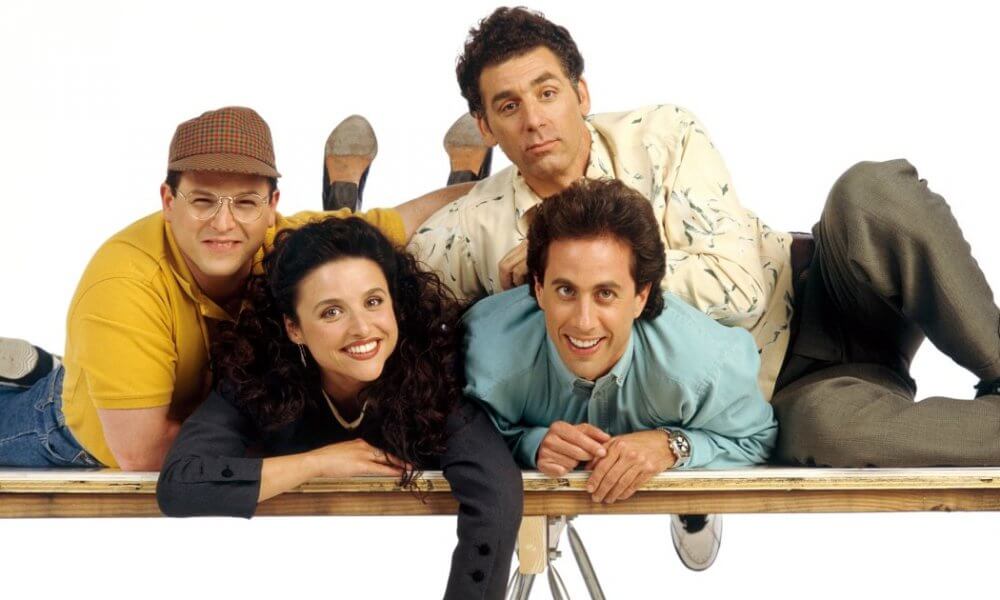 Also not masters of their domain.
Friday’s Rugby News.

This week we dive head long into Seinfeld and becoming masters of one’s domain. My take on the rules around French pastry and a look at the Australian Steelers in their quest for a historic THIRD consecutive Paralympic Gold Medal. You also get to play Wallaby Selector with GAGR’s own ‘Supercoach’ for Bledisloe # 3. 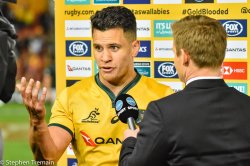 ‘I thought kicking it back to ’em was the best option, given they were only 28 in front and also, I don’t know what to do with my hands?’

Masters of their own cerebral domain

It’s the 81st minute, the final hooter is a distant memory. You’ve already conceded 50 points and scored less than half that. You’re confidence is shot. Your team mates are flat, it’s cold, it’s wet & your side finds itself with the ball. Your mates are rooted. They’re physically spent, had their will broken, their spirit and their confidence completely drained.  There’s no possibility of a bonus point, or any sort of moral of psychological victory. So what do you do next? What does the leader of our backline do? A gent with 60 caps, part of our leadership group, picked for his ‘experience’ as a ‘General’ amongst so many inexperienced ‘Privates’ around him? What’s his ‘go to’ move and inspiration?

Yep, kick it straight back to NZ, ! Better still, kick it to them in open field with a tired and fractured defensive line opposing them. Then? Watch NZ go through the phases and ultimately and somewhat inevitably, score a try. Said try means the Wallabies have now conceded the most points EVER  to NZ AND in the 150th Bledisloe Test AND at Eden Park AND we wonder why this team and stadium has a ‘hoodoo’! FFS, you just couldn’t write this stuff could you?

I understand there will be many contributing factors for decisions made by those in burnt-orange during games (read Nutta’s excellent contribution from Tuesday’s comments section here): inexperience, fatigue, leadership, personal skill, tactics, ambition and game plans that all play some role in our mental frailties. But whatever the cause, a solution needs to be found and fast. Cause sure as the sun doth rise, Oz rugby will not progress anytime soon until all the Roos loose in the top paddock are corralled & culled. On this front the Wallabies need professional, ongoing and consistent assistance. It has to be part of the daily drill as much as fitness, or ball skills, or set moves. For mine it’s even MORE important than those other fundamentals.

The Wallabies must first be masters of their own grey-matter, before they can consistently impose their will and become masters of the domains of others. To do that, the squad must surround themselves with battle hardened, life experienced players to help mentor generation next………..now THAT’s a segue.

A lot of static this week about proposed changes to the Gateau Laws in Australia.

My view on this is simple. When making a cake, don’t you want it to be the best cake you can make? Don’t you want the presentation and results of the cake to have people wanting more of that cake? If the answers ‘yes’, then who really cares where you get the ingredients from?

Sure there might be flour sourced from France, cocoa beans from Japan or even eggs from the UK used to make the thing, but if it tastes great and everyone likes the results, then really, WGAF? Plus if those foreign producers want to spend their coin developing produce for our use, well who are we to stand in their way!

I get the desire to support local producers and use their products. But when the cakes we have made over and over and over the last 10 years, made using locally produced ingredients ends up looking like shit, tasting like shit and performing like shit AND has cake fans all over Australia turning off the product then SURELY isn’t it time we sourced new produce and new recipes to fix the problem? Besides, new recipes and better imported ingredients can often force local producers to enhance their products. So over time , through competitive market forces, the local product improves and you can transition back to home grown produce and only rely on imported ingredients in extenuating circumstances. It also means your cake doesn’t have to perpetually suck year on year. With enhanced imported ingredients you also have the added luxury of simultaneously allowing you to have a better quality cake NOW, plus time to both build & strengthen the domestic supply of ingredients.

It seems a ‘no-brainer’ to me. We all win. Imported goods act as a ‘stop-gap’ to allow for improved short term quality, all the while the required domestic structures needed are given time to evolve, so we ensure the consistency & quality of the cake is guaranteed year in, year out. You know, just like those nearly all black tarts they serve up in NZ all the time. Kiwi fans seem to love the consistency of those?

I call on the chefs at RA to be bold, be brave & abolish The Gateau Law. In doing so Australian Rugby just might end up with a much better prepared and tasting cake and eating it too.

Glad they’re on our side!

No, it’s not the latest Liam Neeson yawn-fest, but the long awaited return of the Australian Wheelchair Rugby side, the ‘Steelers’ at the upcoming Tokyo Paralympics

Not only are our team going for a THIRD consecutive Gold medal, but the team also includes one 34 year old librarian Shae Graham, the first Australian woman to compete in the Paralympics in the mixed-gender sport after only taking up the sport in 2014.

For a change there’s actually a great article from FUX Sports on Shae’s journey from her initial accident and events in-between, culminating in her Steelers selection. And the message from Graham for those watching the Steelers is simple: “I’m honestly not trying to inspire anyone, I’m just playing a sport that I love. And I am lucky enough to represent my country doing that. But if my story inspires anyone along the way then that’s an added benefit.

The Paralympics Opening Ceremony is 24th August with the Wheelchair Rugby kicking off on Wednesday 25th, with the Aussies taking on Denmark to kickoff Pool A.

I cant wait to watch the contest. As the Paralympics only full body contact sport it really is brilliant TV and with NZ in Pool ‘B’ what chance a medal showdown between the two traditional Rugby enemies? Here’s hoping the skill, the hits, the passion, the desire and the ability of these athletes provides a welcome distraction from all things Wuhan Wonder Bug & GO YOU GOOD THINGS !! Three-peat, three-peat, three-peat !!!!!

All the details of the Murderball games, times & venues can be found here and coverage of the Paralympics can be found on Channel 7 & 7plus.

GAGR Supercoach is back for Bledisloe #3 in Perth (well maybe) Saturday 28th Aug.

After much belly-aching & for the pseudo masochist amongst you, you can now choose Quade ‘The Removalist’ Cooper in your team (I simply don’t know why you would you do it to yourself? He did so well for us previously…….all those World Cup wins, Bledisloe series wins……#bringbackspanners). I have also included recent squad additions like Samu ‘Gandalf‘ Kerevi  for your consideration as well.

The reserves are split 5 forwards & 3 backs. I’ll post the results next Thursday morning AEST (the only time that matters in Oz anyway), before the team is officially announced.

‘Pre season bonding at the Tahs’. Not that there’s anything wrong with that.

Everyone’s second-favourite Oz side, the NSW Waratahs have announced Andrew Blades as new GM of Rugby. The World Cup-winning prop has spent the past three years working at one of the biggest rugby schools in Australia, St Joseph’s College. With Blades joining incoming new head coach Darren ‘Gary’ Coleman plus the return of the three ‘H’s – Hooper, Hannigan & Holloway, there are signs of life for sky blue. BUT , our kingdom for a tight-head prop – just how old is Sekope Kepu now anyway?

RA Overlord and karaoke sensation, Hamish ‘The Hammer’ McLennan has outlined a blueprint, thought-bubble, idea on what a 2025 ‘FUKIRS’ (Formal United Kingdom & Irish Rugby Side) tour could look like including possible test’s from the UK snore-fest against some PI nations. Whilst it might only be an idea at present, what’s not to like! Sure our nations emissions will end up causing those same islands to be under water by 2035, but at least we will share some of the FUKIRS cash-cow with them AND help them retain players and much needed World Rugby funding. Scotty from marketing might even throw some coin at it as well to make the tour a reality and to help them pay for much needed life rafts or extendible ladders for mid next decade. Well played Hammer, well played.

Keeping with ‘The Hammer’ for a minute. FUX Sports reports RA are closer to finalising their prospectus to go to tender in September seeking a 10-15% Private Equity stake in the Wallaby brand. Surely prospective stakeholders would be attracted at the moment as the there would seemingly be a fair bit of ‘value’ of the Golden Brand, especially given the horrors of recent results. And by recent I mean largely the last 19 years. For those out there wondering why a cashed up equity group ‘might’ look to jump in now? Well, you don’t make money when you sell something, you make it when you ‘buy right’ in the first place and the Wallaby brand is ripe for the buying right now.

Get this man a cigar

No doubt at great personal risk to his own & loved ones safety, noted & respected NZ scribe Mark Reason proffered these  self-evident truths in an article with Rugbystuffnz.com  ‘And while we are still peering at the mirage (NZ’s win), let’s not forget the ref. In that crucial period shortly after halftime he gave the All Blacks five penalties and a freekick on the bounce as well as awarding a highly significant and unusual not straight against the Australian attacking lineout. It looked home town and was home town and stressed the need for neutral refs.’ Reason by name & reasoned by nature if you ask me.

WA’s own Vladimir Putin has thrown plans for Bledisloe III and perhaps the entire RC into chaos with his latest strong-man moves. SMH & several other media outlets report Premier Mark McGowan going ‘cold’ on the idea of Bled III to be held in West Jo’burg. Originally hailing from Newcastle, McGowan’s only real claim to fame is he increased the IQ’s of both cities when he moved. Don’t be surprised if the rat with the gold tooth, Commandant Palaszczuk takes all games gleefully and in pure coincidence, shuts the border of the QPRQ when it’s all done & dusted #shithouserat