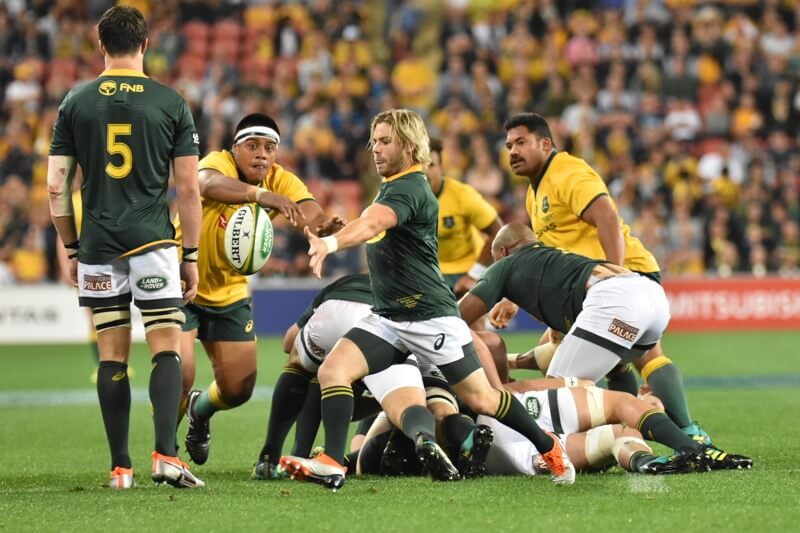 Michael Cheika made some significant Wallaby changes for this test match in the hope it would spark a Wallaby performance that was off the pace against an obviously high quality All Black team.  What he wouldn’t have been banking on was to lose perhaps his three most significant players in the days prior to this Springbok test.  If losing David Pocock and Israel Folau earlier in the week wasn’t bad enough, to lose Adam Coleman on the day of the game was a considerable body blow.

Meanwhile the Boks had made some equally significant changes to their starting side but had a much more settled lead in to kick off. With rain falling for most of the day and clearing just prior to game start, the challenge was certainly in front of an Aussie team wanting to avoid dropping to their lowest ever World Ranking.

The first attacking foray by the Wallabies saw Matt Toomua at first receiver with Beale floating out wide. Kurtley was able to release Peter Samu who found Hodge with space on the wing. Lukhan Tui supported well by wrapping outside and the Wallabies were pressuring the Bok line early. Consistent phase play and some Will Genia snipes soon saw Michael Hooper drive over for yet another test try. 7-0

The first scrum battle came in the 7th minute resulting in the Wallabies ruled to have collapsed and a penalty awarded to the visitors. Jantjies kicked it from about 42m to close the gap to just four. 7-3

Repeated infringements from the Wallabies saw the Boks opting for lineouts and mauls to keep the pressure on the home team. The Wallabies couldn’t keep the well drilled Boks out for too much longer and hooker, Bongi Mbonambi was the scorer of the anticipated try. With the Jantjies kick successful the Boks took the lead 7-10.

Faf de Klerk was starting to impose himself and dictate how he wanted to play the game. A smart kick gave them quality territory and soon enough it was his cut-out pass to winger Makazole Mapimpi enabling him to cross out wide. The missed kick put the score at 7 -15.

The Wallabies hit the attack hard in reply and Jack Maddocks looked to be in only to be tackled into touch by Jesse Kriel short of the line. Any sense that the Boks would play it safe soon evaporated when a bizarrely wild throw went well over the lineout and allowed Toomua to scoop up the ball and score under the posts. 14-15 with the kick.

Tatafu Polota-Nau was noticeably struggling to keep up with the play and was pulled early with the rookie Folau Fainga’a taking his spot. Meanwhile the Boks also changed their hooker yet had the luxury of bringing on the world’s best hooker in Malcolm Marx.

Another Scrum penalty by the Wallabies, with Allan Alaalatoa struggling to hold his form, and Jantjies kicked an easy one. 14-18

With half time close the Wallabies would have one final say as they claimed their own penalty about 54m out. As we have got used to up here, up stepped Reece Hodge to smash it into Caxton Street and close the gap to one at the break with the score sitting at 17-18.

It was a half dominated by scrappy Wallaby handling, poor discipline, Glen Jackson led scrum frustrations and a patient and precise Springbok outfit. 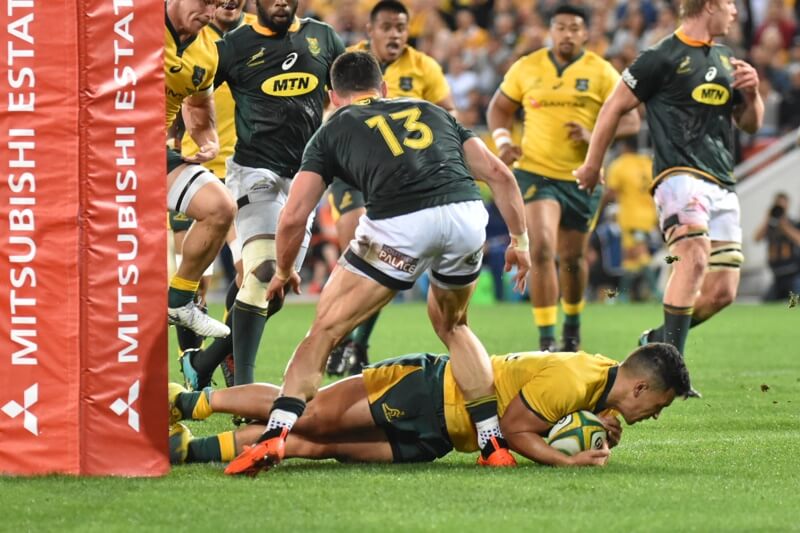 Matt Toomua scores a crucial try for the Wallabies

A good Wallaby scrum in 42nd minute was a positive sign of things to come and Genia was off on a run down the blind. His kick and chase gave the Aussies just the start they wanted. Another strong Wallaby scrum set them on attack and it was only a spilled Rob Simmons’ ball that prevented any scoring. It was business as usual though with a scrum penalty relieving the pressure and the Boks were able to clear.

Another dodgy throw gave Genia ball at the back and the Wallabies were on attack again. This time they held the ball, but the Boks managed to hold them up over the line. The 5m scrum saw the appearance of Taniela Tupou and a Wallaby attacking scrum.

The Wallabies were not able to take any points and we then entered a period of bizarre play by both teams with crazy passes, strange leaves and dodgy kicks. It made sense that when the Aussies finally received a penalty they settled and gave the ball to Toomua to pot the kick. The Wallabies were finally back in front 20-18.

Dropped flyhalf, Bernard Foley would enter the play in the 62nd minute for Jack Maddocks with the shuffle pushing Beale to fullback and Dane Haylett-Petty to wing.

Folau Fainga’a was having a real impact on the game, particularly at the ruck however two crooked lineout throw calls threatened to derail his enthusiasm. He played his part in a dominant scrum soon after, with Tupou besting the Beast, and Toomua kicked the penalty that arose. 23-18.

With minutes to go in the game the Boks were hard on attack and it looked for all money like replacement Francois Louw had scored. Replays showed that Beale knocked it on but so too did Marx and the try was not awarded.

The Wallabies defense was working hard to keep the Boks out and another penalty against the home team gave the Boks one final chance to snatch the game. They took the scrum in front of the posts and, again, the Wallabies’ defense held strong. Birthday boy Bernard Foley snatched an intercept before Genia booted it into the crowd to claim the victory.

The win was Australia’s first since the first test against Ireland and ensured they retained they Mandela Challenge Plate.

It’s hard to come up with one in a game when the result came down to the wire.  I will suggest that on the back of that strong Wallaby scrum at the start of the 2nd half, and the Genia dash from the base seemed to give the Aussies a mental boost.

Matt Toomua was the official Player of the Match in an impressive return to the Wallaby starting side. For mine the two scrumhalves were keys to their respective wins with Will Genia being a standout for the Australians.  Kudos to Lukhan Tui for an impactful game and to Fainga’a who was busy throughout.

Tuesday’s Rugby News
Is it time to spice up the Rugby Championship?